It was 38 years ago today, October 21, 1975, that the Red Sox came into Game 6 of the 1975 World Series on the brink of elimination, down 3-2, to the Cincinnati Reds. They needed two wins at Fenway Park to capture what would have been at that point the team’s first world championship in 57 years.

Carlton Fisk hit one of the most famous home runs not only in Red Sox team history, but in the entire annals of the sport. The shot of Fisk willing the ball fair is the most iconic, recognizable image. However, there were numerous other details from earlier that night that served as fitting prelude to that epic moment in the bottom of the 12th inning.

WSBK-TV 38’s lead announcer in the mid-70s was Dick Stockton, who provided the play-by-play for NBC’s national broadcast through the middle of the 5th inning. At that point, he passed off to Joe Garagiola. Tony Kubek provided color commentary and left the booth in the late innings to camp out in the Cincinnati clubhouse in case they had clinched the series once they took a three-run lead in the 8th. He spent the next four-plus innings shuttling back and forth between clubhouses awaiting the winning rally.

(Interesting side note: Stockton met his future wife, Lesley Visser, at this game. Visser, who was then a reporter for the Boston Globe, would later marry Stockton. The couple divorced in 2010.)

The virtuosity of the recently deceased Harry Coyle was on display throughout this game. Coyle was a visionary, pioneering influence for the way modern sporting events are broadcast. As highlighted in this recently uploaded footage, Coyle once navigated the end of a Red Sox-Brewers game in 1982 with the benefit of a single camera. Even a fuzzy upload on YouTube of 1975’s Game 6 is a testament to how compelling a baseball game stripped-down of modern graphical amenities can be.

00:05: El Padre Tiante is shown before the ballgame, cigarette hanging from his mouth and fist tightly pumping just above his head. This GIF of Tiant posted on FanGraphs last year is awesomely mesmerizing…

00:28: El Tiante taking his warm-up tosses. Tiant came into the game with cartoonish postseason numbers, having gone 5-0 with five complete games in which he allowed two runs (one earned) for an ERA of 0.20. He’d struck out 33 batters while walking eight and allowing 20 hits.

1:28: Reds leadoff batter Pete Rose lines a ball to Carl Yastrzemski, who makes a diving catch for the game’s first out. 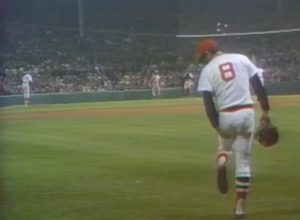 9:26: Just before Tiant dispatches Johnny Bench swinging to end the first, a shot of the flag over the third-base stands shows the wind blowing generously out toward center field. 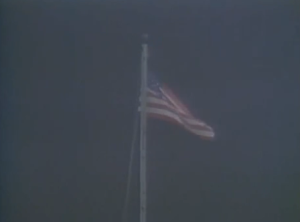 11:41: Reds starter Gary Nolan deals to Denny Doyle in the bottom of the 1st. Doyle came into the game as the only player to have a hit in each of the first five games of the ‘75 Series.

16:27: After two quick outs in the bottom of the 1st, Carl Yastrzemski keeps the inning alive with a single to right and Carlton Fisk pulls a single to left. Nolan hangs his first pitch to Fred Lynn on the inner half of the plate and Lynn doesn’t miss it, delivering a three-run home run over the home bullpen in right field. 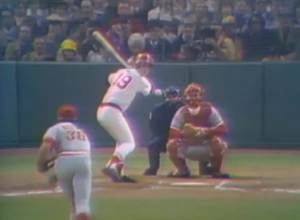 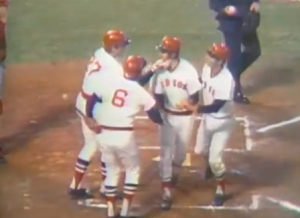 18:48: During the top of the 2nd, NBC shows an establishing shot of another well-placed cameraman in a “precarious spot” at the extreme edge of the Fenway Park roof, right next to the left-field foul pole.

19:20: In the early going, Kubek gushes over Tiant’s many deliveries and pitching motions. On this pitch, with his center of gravity in extreme torque and his plant leg kicking in the exact opposite direction of home plate, Tiant does one of his signature skyward head lifts, and still manages to turn and lurch forward, landing with complete balance. 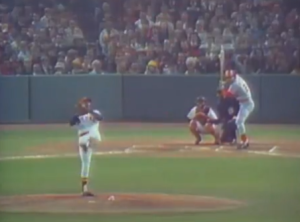 19:35: The pitch itself isn’t so bad, either. Tiant gets Tony Perez to reach so far outside on this slider that he is still caught helplessly following through on a lunging swing, even as Fisk is in his throwing motion toward third base for around the horn. One of the commentators puts it brilliantly: “Perez almost looked like a question mark on that swing.”

31:55: Not all the fancy-pants tricks NBC had up its sleeve worked all that well. This overlay of Tiant and his father cheering from the stands in the 3rd inning is maybe a bit too creepy for comfort. 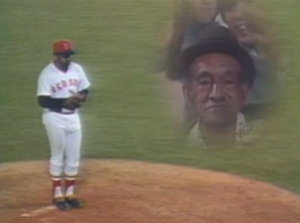 1:15:26 – 1:16:58: Tiant walks pinch-hitter Ed Armbrister with one out in the 5th inning. After a Rose single moves Armbrister to third, Ken Griffey hits a long drive to center and Fred Lynn launches himself into the unpadded cement wall, near where the left-field wall converges with the wall directly below the center-field camera well. Lynn lays crumpled in a heap in center as Yaz runs over. Fenway goes completely silent for several minutes before Lynn gets up and ultimately stays in the game.

1:17:45: Lynn shows the center field crowd exactly where it hurts. Thankfully, he was able to turn and kick his foot off the wall just hard enough to spare his head, which came dangerously close to slamming into the concrete along with his lower back. Cincy would wind up tying the game with its three-run 5th inning, snapping Tiant’s streak of 40 ⅓ scoreless innings. But Lynn’s staying in the game would be a key for Boston. 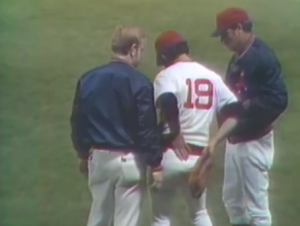 1:23:18: Halfway through the ballgame, Dick Stockton passes the play-by-play duties off to Joe Garagiola. The camera angle here makes it look like the guys are sitting in the middle of the diamond. (Stockton later took back the play-by-play baton in the 10th inning.) 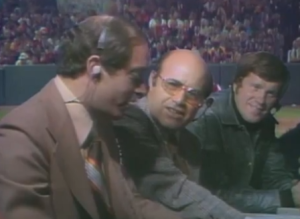 1:53:22: Tiant continues to look human for the first time in weeks. Ken Griffey begins the 7th with a single to right and Joe Morgan follows suit. A batter later, George Foster doubles off the center-field wall, giving the Reds a 5-3 lead. 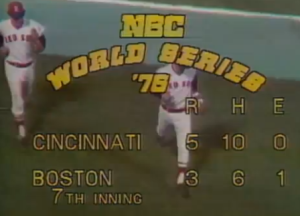 1:56:00: This establishing shot shows just how low the top tier of Fenway Park was in 1975. The 600 Club and the multi-tier press box above were still more than a decade away from being built. Studies – and Wade Boggs – later confirmed that wind patterns and baseball flight paths were meaningfully impacted.

1:59:37: Cesar Geronimo leads off the top of the 8th by hooking this pitch around Pesky’s Pole in right. 6-3, Cincinatti. Lefty Roger Moret enters the game for Tiant, who winds up giving up six earned runs.

2:05:42: Fred Lynn serves the first pitch of the bottom of the 8th off Pedro Borbon’s leg and reaches first safely to start the inning.

2:10:06: After Rico Petrocelli works a walk, Sparky Anderson replaces Borbon with Rollie Eastwick, who inexplicably foregoes a ride to the mound on the bullpen cart. Garagiola makes note of this odd behavior.

2:10:26: Right here, it kind of feels like Johnny Bench is going to start walking toward the camera and spray the lens with Krylon Paint.

2:18:09: With runners on first and second, Dwight Evans strikes out and Rick Burleson flies to right. Pinch-hitter Bernie Carbo steps to the plate. 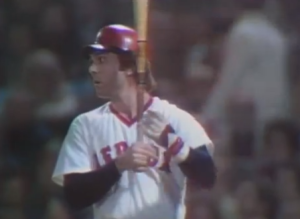 2:18:51: Carbo puts a perfect swing on a pitch that’s left out over the outer half of the plate and belts a home run into the straightaway center bleachers. 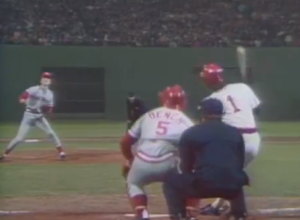 2:19:04: The Fenway crowd, quiet most of the night after the Lynn injury, is absolutely ecstatic. 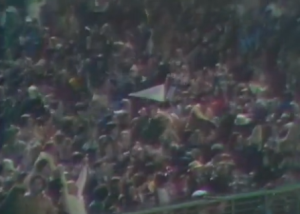 2:26:05: A fan and his or her (androgynous 70s haircut makes it hard to tell for sure) “Big Red Machine Has Power Failure” sign as Boston gets ready for the bottom of the 9th. 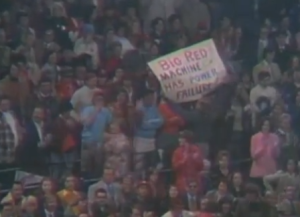 2:29:22: Denny Doyle gets to third base with none out in the 9th inning thanks to a Yaz single to right. 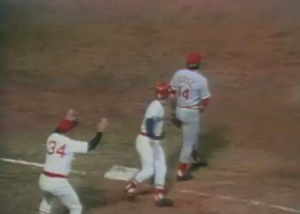 2:32:50: The first order of business for left-hander Will McEnaney is to issue an intentional walk to Carlton Fisk. 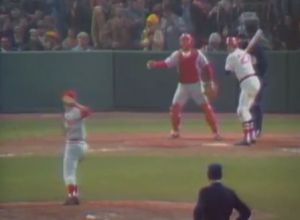 2:33:55: Rico Petrocelli comes up with the bases loaded and nobody out and lifts a fly ball along the wall in shallow left field. Foster makes the catch and throws Doyle out on a perfect throw to Bench.

2:48:48: Dick Drago pitches the 10th inning for Boston. As the Sox briefly conference at the mound with a runner on and one out, the announcers note that The Tonight Show will not be seen this evening. 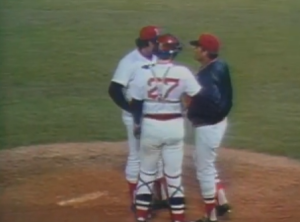 2:51:31: Carbo makes an adventurous catch in shallow left to end the 10th as the wind blows it just far enough out of fan interference territory. 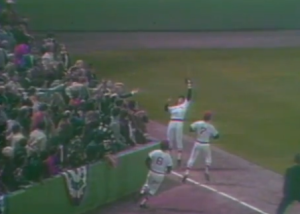 2:59:40: Leading off the 11th, Pete Rose does a cute little pirouette next to an inside pitch and convinces the umpire it hit his jersey. Half-speed replay proves Peter Rose to be a dishonest man.

Carlton Fisk isn’t amused. Rose is soon erased trying to advance to second on a weak Griffey bunt that is fielded by Fisk.

3:05:11: Everything happens so fast on the famous Dwight Evans catch on the deep drive off Morgan’s bat that it is difficult to capture clearly in still frame.

Evans leaps a few yards short of the wall and makes a full extension catch before landing his left shoulder into the padded right-field fence. Griffey is caught so far off first base that he is doubled off even though the throw into the infield from Evans nearly winds up in the Red Sox dugout. Inning over.

3:12:34: The Red Sox went quietly in the bottom half of the 11th. Rick Wise took the mound in the top of the 12th inning as the 12th pitcher to take the mound in the game, which was a World Series record at the time.

3:13:23: Ever the innovator, Harry Coyle goes to a quadruple camera split screen as Wise warms.

3:15:05: The wind again seems to aid Boston here as it pushes this foul popup behind home plate back onto the warning track and into Fisk’s glove. Wise would put two on but strike out Geronimo to end the top of the 12th. 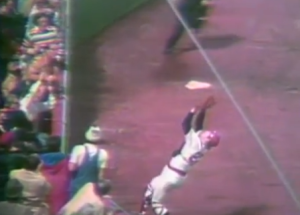 3:25:44: With Darcy in the game for Cincy, Carlton Fisk comes to the plate for Boston. 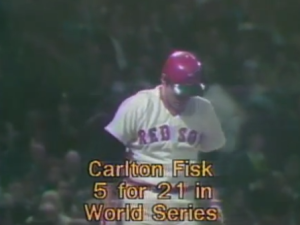 Fisk takes a first-pitch ball high. The second pitch is left over the inside part of the plate. The images tell the story from here: 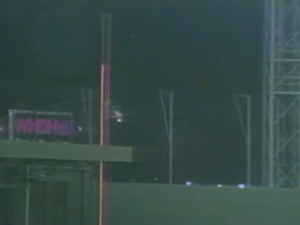 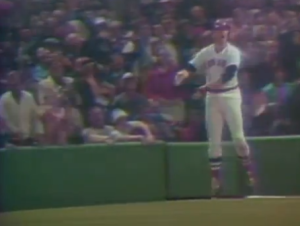 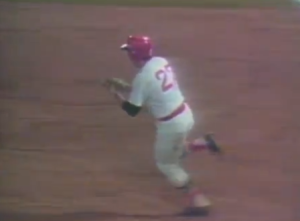 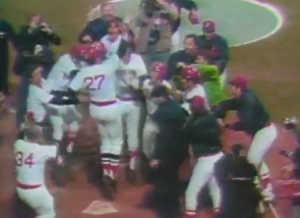 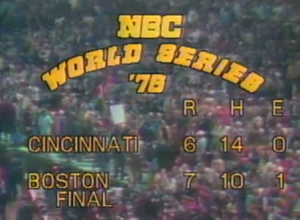