MLB to fine Matsuzaka for threatening to return in 2012 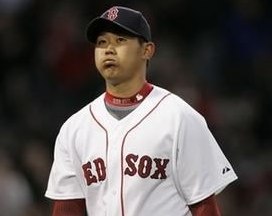 Commissioner Bud Selig runs a tight ship when it comes to ballplayers and silly proclamations.

It is, therefore, no surprise that his ears perked up when injured Red Sox pitcher Daisuke Matsuzaka told Boston media on Sunday morning that he is aiming to return to the team in 2012—after he is finished recovering from Tommy John surgery.

The offending remarks from the Japanese right-hander (“I’m sure I will come back to the Red Sox…”) were met with immediate alarm.

“We cannot allow active or former players to terrorize fans and jeopardize the popularity and integrity of our on-field product in any way,” said a spokesperson for the commissioner’s office. “We want to reassure our fans that, under various statutes in the sport’s rulebook (both written and unwritten), as well as relevant modifications to the Geneva Convention and our liberal interpretation of the New Testament, Daisuke Matsuzaka will not be permitted to pitch anywhere in North America ever again.”

Matsuzaka, who has indeed tortured Red Sox fans for years with his deliberate pace and varying degree of effectiveness, returned to Japan last week to finalize plans for reconstructive surgery.

Fans and media alike had presumed the end had mercilessly arrived until the pitcher returned to Boston and expressed optimism at a possible return.

“The very idea that fans could be subjected to not only minor league rehabilitation starts, but also late-season, drama-filled games at the major league level is really pretty upsetting,” Selig said in a statement Monday afternoon. “Four-plus seasons of his work have indeed been plenty. Enough is enough.”

The commissioner’s office expects to finish gathering information about the interview session and finalize Daisuke’s punishment later this week. The team-employed translator on hand at the time of the remarks will also be disciplined for his role.

A portion of the monetary fine that is collected will be donated to government agencies dedicated to ending Attention Deficit Disorder.

Boston fans were understandably distressed as the news spread throughout various news outlets.

“It’s obviously an idle threat, but you have to draw the line somewhere,” said Christopher Mayhew from Brewster. “I feel sorry that Daisuke is hurt and has to go under the knife, but I’m also ecstatic that he’ll be out of my life and that I won’t have to worry about buying tickets to a game he winds up starting.”

Nancy Thwylynski from Uxbridge agreed. “Just more pain for us New England sports fans, I guess. We really have to just continue to endure and pray for closure.”

Amazingly, even Matsuzaka’s agent Scott Boras is on board with what is expected to be a sizable fine for the remarks.

“They have to do something,” Boras said. “I am not prepared to compromise my integrity as an agent by having to put together a free agency proposal for this man. It would simply require too much manpower to attempt to construct a binder of metrics trumpeting him as a viable free agent. Even I know when to call off the dogs.”

Bringing ‘Dirty Water’ Back into the City of Boston

Depending on who you ask, it was either one disaster or one catastrophe after another for Bostonians over the weekend. A ruptured metal collar caused a large breach in the pipe system that supplies the city with its drinking water. Meanwhile, the Red Sox put the finishing touches on allowing a disastrous sweep at the hands of the Baltimore Orioles.

All this happened while two million residents adhered to “boil water” orders and a hellishly cruel halt on sales of Dunkin’ Donuts coffee—a quality of life issue that is the baseball equivalent of being forced to cheer for the Kansas City Royals.

Some parallels of Beantown’s double-headed crisis:

Adrian Gonzalez and bottled water: The people clamoring for Theo Epstein to mortgage the club’s future in a panic trade for Adrian Gonzalez are the same morons overbuying cases of Poland Springs water as they brace for an impending apocalypse in which—horror of horrors—they may be forced to boil drinking water for a couple of days. Meanwhile, taking into account the current makeup of the major league roster and the bulk of future talent in the minor leagues, at least half the clubs in major league baseball would gladly trade positions with the Red Sox. Overreactions to one month of mediocrity are as embarrassing as the bomb-shelter mindset of many Greater Boston residents over the last two days.  The people in underdeveloped third world countries without running water would drink Chestnut Hill Reservoir’s so-called pond water as though it were the nectar of the Gods. They would nurse those cartoonish 45-ounce bottles of Fiji water like it was 50-year-old Scotch.

Yankees fans and rat bastards living in Cambridge: These people always find some way to be obnoxious. While residents in the Back Bay drink tinny-tasting water out of spaghetti pots, those Fresh Pond-drinking liberals across the Charles smugly hydrate themselves worry-free as though it were some sort of birthright. They aren’t getting any of the bottled water that Boston hoarded if the same thing happens to them this summer. Similarly, let’s see how good the Yankees look when injuries start assaulting their old, brittle starting lineup later this summer.

Darnell McDonald and bleach: Sprinkling a few drops of bleach into the water sanitizes it just enough to make it usable for washing dishes or dirty hands. Psychologically, it’s about as desirable as starting a 31-year-old journeyman in center-field, but it will do the trick in the short term. A few months from now, if the Red Sox right the ship, we’ll be able to laugh and say “remember when Darnell McDonald was getting big hits in high leverage situations and we had to boil our drinking water?”

Advocates of Daisuke Matsuzaka and people who drink tap water: Tap water drinkers who thumb their noses at people who “waste” money on bottled water should stick to their guns and ignore all those signs warning against drinking from the faucet. There’s only something like 3-5% more fecal matter and bacteria in the backup supply compared to the normal levels in Quabbin’s main pool. Similarly, those hanging onto the hope that Dice-K still has something left to offer his team may be tempted to re-evaluate their opinions based on his feces-like performance on Saturday (4 2/3 innings, 7 hits, 2 HRs, 3 BBs, 4 Ks). But that would be extremely shortsighted and hypocritical. Drink your poop water and hope the Dice Man turns it around on Thursday night.

Aramark and price gouging retailers: The state is vowing to crack down on local businesses who try to take advantage of the relative spike in demand for bottled water versus a quickly diminishing supply. Based on these standards, fans in Fenway Park for the upcoming 10-game home stand shouldn’t expect to pay more than $10.00 for a 20-ounce bottle of Aquafina. Any price higher than that will be considered overcharging customers for the sake of profit.

The local media and…the local media: Nothing bolsters ratings and newspaper sales like a good, old-fashioned poor start to the baseball season coupled with some relatively minor inconveniences that can be overblown by the media under the guise of providing a public service.