Sometimes the reality, when all is said and done, just doesn’t quite measure up to the expectation. Red Sox utility player Mike Carp came into the 2014 season expecting to be written into the lineup quite a bit more often than he has. At the very least, he figured to be a tough-out left-handed hitter who would come off the bench in later innings and force the opposing team to perhaps burn one of its southpaw relievers in order to swing the platoon advantage. That of course, hasn’t happened all that much – Carp has only played in 36 games. Put in more simpler terms, there is a natural gulf between the optimism of a prototype and the harsh truths of the final product.

Take, for example, this lifelike graphical presentation of a Mike Carp Commemorative 2013 World Series bobblehead listed on the MLB Shop via RedSox.com:

Then, imagine you’re a rabid Mike Carp fanatic and you have just received this in the mail after a tortuous two-week wait while the merchandise wended its way through the U.S. Postal Service:

Then, and only then, do you revisit the product page and read the fine print tucked away near the bottom of the page: Design of product is subject to change.

Now that the truth is staring – no, more like nodding – at you square in the face, there’s only one thing left to do. Box that thing up like it’s still brand new and sell the thing on eBay to the highest bidder.

The Red Sox forge ahead toward the start of the 2014 season, which is now 10 days away. The overall local buzz for a team coming off its third World Series in 10 years has been a bit restrained so far thanks to the Patriots’ active offseason and the Bruins’ continued success. But it’s hard to argue with a largely uneventful spring as that usually means good things for a baseball team with a roster as talented as Boston’s. The enthusiasm will come in due time.

Airline-style Pricing For the Monster Seats
On Forbes.com, Jesse Lawrence writes about the Red Sox’s decision to implement dynamic pricing for Green Monster seats this season, a move could net the team about $2 or $3 million of extra revenue.

Last year, Green Monster tickets had a face price of $165. While supply on the secondary market is usually limited to under 10 tickets each game, secondary-market ticket prices typically range from $250 to $450. … At 81 games over the course of the season, our calculation assumed an average free-market price of $350, which would mean an incremental $185 of revenue each game. For conservatism’s sake, we discounted that to $150 of incremental revenue per seat per game. With 20,000 Monster seats to sell over the course of the season, that equates to a clean $3,000,000 of incremental revenue for the World Champions–perhaps just enough to cover the addition of right-handed pull hitter at the trade deadline.

Wait, the Sox didn’t sign Jonny Gomes for his facial hair?
Yankee Stadium gets a lot of attention – along with Coors Field of course – for having a short porch in right field and a generally hitter-friendly environment. However, in 2013, as Tony Blengino writes on FanGraphs, Fenway Park was actually the second-most flyball-friendly ballpark in the majors after Coors (which is in its own stratosphere). Fenway’s “Park Factor” came in at 151.1 (average being 100) versus 116.5 for sixth-place Yankee Stadium. This measure is just another of the many ways in which New York is overrated.

We are now beginning to localize and quantify the Fenway fly ball factor – it is largely attributable to fly balls that would be outs almost anywhere else, that instead become doubles off of the high LF, LCF and CF fences. Now, to find some position players who hit more such fly balls than other players do, as well as some pitchers who can minimize such damage.

The Red Sox did just that, particularly in acquiring hitters Jonny Gomes and Mike Carp, both of whom are especially adept at lifting the ball in the air. Of course, park factors are somewhat dynamic from year to year and it’s likely pitchers may adjust. But it’s probably no accident that Gomes and Carp both drop their wrists low early in their swing path in order to get underneath the baseball.

Red Sox-Yankees Gets Delayed Because of Bees
“Bees everywhere! God, they’re huge and they’re sting-crazy! THEY’RE RIPPING MY FLESH OFF!”

Rumors swirled about whether Mike Carp did his best Chris Farley impression as he vacated the infested outfield.

Groundskeepers Dig Out After A Long Winter
With MLB Opening Day only a little more than a week away, teams that will be hosting games in late March amidst a late-arriving spring thaw face the challenge of getting the field in playable conditions.

That frost in the ground at U.S. Cellular Field can be measured in feet, not inches. To ready the field for the first pitch, Bossard is overseeing an effort akin to blowing a gigantic hair dryer under a tarp to pump hot air onto the field and thaw it out. Crews have been chipping away at ice near the right field line with shovels.

Groundskeepers at Fenway Park will have a few extra days to get the field in shape for Boston’s opener at home on April 4. But they are likely in a similar situation. Here is one encouraging shot of the park in early March posted on Sons of Sam Horn by user “Tippi Hedren”, just prior to several weeks of additional snow, ice and cold temperatures rolling through: 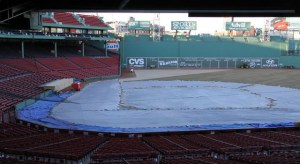 The outfield seems to have a color that at least resembles a very pale shade of green. It won’t be long now…

This Week in Boston Baseballing, September 6 – 12

The Red Sox followed up a stirring comeback victory in New York last Thursday by slugging their way to wins in the next two games, ensuring a series victory against the Yankees. Boston forced Mariano Rivera into a second blown save of the series on Sunday afternoon, but the Yankees fought back in the bottom of the 9th to salvage the finale.

The Sox won their three-game series in Tampa Bay and have a 8.5-game lead over the Rays in the American League East. The Magic Number now stands at eight games. Boston is three games ahead of Oakland for best record in the AL and home field advantage in the playoffs.

Koji Extends His Perfect Streak to 34 Batters
Koji Uehara picked up a win in Boston’s 10-inning victory Wednesday night. The reliever has now recorded the equivalent of a perfect game plus an additional seven hitters. Eight out of every 10 pitches thrown during the stretch have been strikes.

The World According to Carp
Mike Carp’s grand slam over the center-field wall gave the Red Sox the 7-3 win on Wednesday in extras. After sitting on the bench as a spectator for four hours, Carp swung at the first pitch he saw from Fausto Carmona and ran hard out of the box, thinking triple… 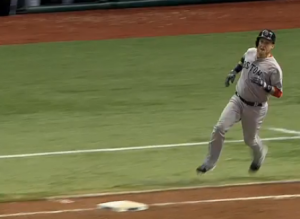 …right up until the ball cleared the fence. 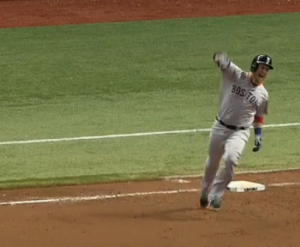 Clay Buchholz Returns
Boston’s three-game set in Tampa Bay began Tuesday night with Clay Buchholz taking the mound for the first time in three months. Buchholz struck out six batters and walked only one in five innings, throwing an efficient total of 74 pitches. David Price pitched eight innings and struck out nine for Tampa, but the Sox were able to scratch out a couple of runs thanks to a Mike Napoli double and a Johnny Gomes single in the fifth. 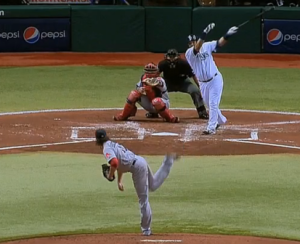 With the Sox maintaining a comfortable lead in the AL East over Tampa, it was likely one of the last impactful wins the team will have this season. Buchholz made a strong case in his first start back that he can go head to head with the league’s best pitchers.

Jacoby Ellsbury Has a Fractured Navicular Bone
Ellsbury will shed his walking boot and take the next week or two to let the bone finish healing on its own. Jacoby is expected to return before the end of the regular season to “regain his timing” at the plate leading into the playoffs. Or, if you’re Ellsbury’s agent Scott Boras, he is expected to return in time to *cross fingers* pad counting stats in lieu of his pending free agency.

Pedro Martinez and Derek Lowe Bump Fists
With NESN color commentator Jerry Remy out for the season, various former Red Sox are being brought into the booth to fill the void. During the first game of Derek Lowe’s three-game tryout in Tampa, Pedro joined Lowe to reminisce about the 2004 World Series team.

D-Lowe was very solid in providing insightful assessment of Buchholz’s return. But he still sounded a bit shell-shocked at times over the last three days by his abrupt retirement from the game. Earlier this year, Lowe pitched 13 innings out of the bullpen for the Rangers. He was able to maintain a self-deprecating good humor about how quickly things ended. On Thursday night, he jokingly pointed out that three of the AL Wild Card contenders – the Yankees, Indians and Rangers – were all recent former employers competing for a playoff spot minus his services.

The Red Sox Announce Dollar Beard Night
You know it’s been a rare season when the Red Sox need to resort to a minor league-esque marketing gimmick to get fans to show up at Fenway Park to watch a team that is flirting with 100 wins. 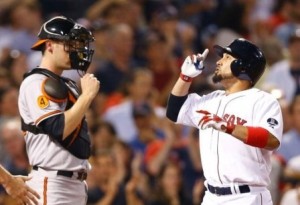 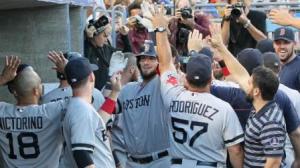 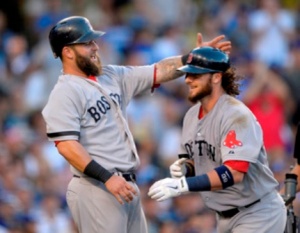