The Youker Files: On My Bittersweet Swan Song as a Red Sox

Well guys, I guess this is it. 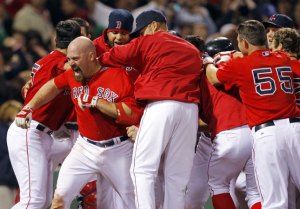 I was kind of expecting I’d be here for another decade or so pounding doubles all over Fenway and taking over at DH for Ortiz. But apparently word got down to the dugout during Sunday’s game that I’d been traded to the Chicago White Sox.

It was weird being in the lineup knowing that you might not technically be a member of the team by the time the game you’re in is over. Now I know what it felt like to be Manny Ramirez every day during the month of July from 2004 until 2008.

It was classy of Bobby Valentine to take me out after I stung that triple to right in the seventh. But I gotta be honest, I was planning a straight steal of home on the next pitch and if I was safe, I was going to throw my helmet really high in the air and run around Fenway smacking five with everyone like Carl Yazstremski as everyone was losing their mind in Youk-phoria. But I guess this was alright as a backup plan. We had a pretty big lead at that point so stealing home might not have gone over well in the Braves dugout.

Nine years as a member of the Boston Red Sox organization. I can’t say it was perfect, but the important thing is that I’ve made a lot of great memories here. (I’m ignoring the time Terry Francona implied to the media that I have a small penis…).

It’s always bittersweet when you walk away from something great. I remember when we wrapped up filming of Milk Money in 1994, I was pretty broken up about not knowing when I’d see Melanie Griffith again. I guess in some ways that’s how I feel about guys like Beckett and Ortiz and Salty and Petey — they’re like adult versions of what Melanie Griffith meant to me in my youth. I hope that makes sense and doesn’t sound weird or creepy or anything.

(I never really liked Ed Harris. So I guess Bobby Valentine can be Ed Harris minus the obvious acting talent.)

Sorry for all the rambling, but I’m still at a loss for words about leaving a town where I’ve seen my life flash before my eyes so many times. All the fans out there lived through it all with me. Every missile fired at my neck by some forgotten, head-hunting middle reliever. Every broken bat tomahawking down the third-base line at my skull. Every ill-advised headfirst slide into first base. Every bench-clearing dust-up where I screamed myself hoarse at some overzealous hardass on the other team who thought he was being a good teammate but was really just in over his head.

I’m going to call my brother-in-law Tom Brady later today to make sure he’s doing OK. Local athletes in the city kind of have an unspoken kinship, especially the bigger stars like me and Tom Brady. So I want to make sure TB12 knows we’ll still have that connection even if I’m in Chicago since he’s my brother-in-law and all that.

To all my fans, I know a lot of guys pay local papers like Boston Globe for those full-page ads expressing their thanks for all the support, but I don’t know if I really need to do that. It seems kind of self-serving. If, or when, I come back here during the playoffs and hit a couple towering walk-off dongs over the Green Monster, I’m probably going to be pretty fired up about it, so the whole thing would kind of look phony at that point, right?

So yeah, I’m off to the Midwest, near where it all began for me back in the day. Being a Cincy native, I always thought Chicagoans were a bunch of flashy holier-than-thou snobs, but I’m sure at heart they mean well. I just hope they don’t expect me to change who I am. I’m still going to let out loud strings of expletives every time I foul a ball off my big toe.

I’ve had a lot of kids tell me they learned most of George Carlin’s seven major curse words from me telling off bad umpires. I can’t help but well up a little bit knowing I’ve touched so many lives during my time here.

Somebody once said something pretty deep to me. I hope I get this right – it was, “Don’t cry because it’s over, smile because you never tore every muscle in your shoulder irreparably while repeatedly hammering your batting helmet on the dugout water cooler after being called out on strikes.”

I don’t think I can say it any better or more simply than that. Adieu, Boston.

In this darling video above posted on Comcast SportsNet, David Ortiz can be heard ranting, throwing a tantrum, if you will; lashing out at the media…his, wait a second, what in God’s name is everybody talking about: A rant isn’t supposed to be some calm exchange of questions and answers, as can be witnessed here–a rant is something that’s just completely uninhibited by the constraints of normal human interaction, it’s a one-sided diatribe that’s often expletive-filled and devoid of any structure or basic courtesy such as a pause allowing for a retort or a shorter pause or even some or any kind of a verbal comma or semicolon and it just runs on and on and becomes difficult to listen to after a period of time because the speaker has selfishly hijacked the proverbial conversational highway, if you will, effectively making it a one-way street for his, and only his, viewpoint on whatever the specific matter at hand happens to be, thus what is evident in this particular instance is about the farthest motherfucking thing from a rant or a hissy fit or a popping off of the mouth because, shit guys, even Steve Burton is edging his questions in here while all the while one Big Papi attempts to indulge “reporters” by pretending they aren’t human vultures and by speaking his mind ever so momentarily on his way to the batting cage, where he can hone the one and only skill Boston fans truly care about because, shit (there’s that word again), why in the world would anyone care whether he’s polite or even slightly resembling an adjusted, normal human being when it comes to microphones being shoved in his grill when all the dude might want to do is just go about his business without completely losing his shit all the time, which would be perfectly understandable given the current state of the coverage of a competing, contending ballclub and the apparent misunderstanding the local media has in regard to the meaning of certain words like ‘rant’ – not to mention other words such as ‘relevance’, ‘perspective’ or ‘tact’?