For years, former Red Sox third baseman Wade Boggs’ legacy of drinking dozens of Miller Lites on cross-country flights has raged. Conservative estimates of the Chicken Man’s drinking prowess generally range between 60 and 70 in one sitting.

Meanwhile, former NFL linebacker Lawrence Taylor is now asserting that he got blackout drunk off 41 Coors Lights on the night he was drafted by the New York Giants.

Isn’t it about time these two retired athletes got their names back in the headlines for positive accomplishments on a playing field?

Last year, as part of a hokey minor league promotion, Boggs poured beers for other people at a Lowell Spinners game. But that gig had to have been as unfulfilling as being paid to wear a Tampa Bay Devil Rays hat into the Hall of Fame. A shrewd business decision, yes. But it won’t help the Chicken Man get to sleep at night as easily as two cases of Miller Lites.

Taylor, meanwhile, could use a makeover to his reputation after a depressing appearance on Dancing with the Stars.

The similarities between the two players are alarming: Both are 51 years old. Both played spotlight roles on big-market teams under constant, extreme scrutiny. Both played at high levels while feeding destructive addictions (chicken, sex and beer for Boggs; cocaine, sex and beer for Taylor). Both also tearfully confessed their regrettable vices on national television.

This isn’t so much a suggestion or merely a good idea. This is an outright demand that the Red Sox facilitate and host the event at Fenway Park sometime this summer.

The current Red Sox ownership group has whored out Fenway Park for much less savory events—John Henry’s wedding, Dave Matthews Band, Jimmy Buffet and Phish concerts, to name a few. Two Hall-of-Fame athletes from the 1980s drinking as many beers as they can over several hours is a better expenditure of time and resources than some jam band attempting a clumsy cover of “Sweet Caroline.” And it would undoubtedly generate more money.

Broadcasting rights for the event would sell to a national network for millions. Or, if NESN were so inclined to air the event, advertisement revenue would be astronomical. If he were still employed by the team, Dr. Charles Steinberg wouldn’t say no.

What’s more, a Boggs vs. Taylor drinking contest would wreak much less havoc on the outfield grass in the middle of the summer than a gigantic stage. All the ballclub would really need to do is set up two large tables on which each could pile his empties in pyramid fashion.

The tickets would sell themselves and the team could practically print money (if they haven’t done so already) based on the amount of beer sales to wannabe competitors liquoring themselves up in the stands. The Boston police officers sore over civilian flaggers cutting into their paydays? They can all work crowd control at the event. For once, they would actually earn their $200 per hour keeping the mayhem to a minimum.

See? Everybody wins. (Unless Butch Hobson shows up.)

A Few Things about the Jordan’s Furniture Monster (Hit) Scam 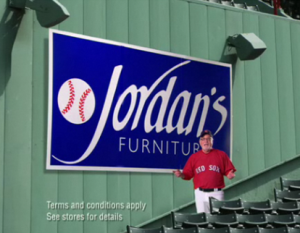 The sign in center field is just above bleacher section 40, just waiting to be peppered with tape-measure home runs as part of the Jordan’s Furniture Monster Hit promotion.

So any home run that hits that sign during a game means free furniture for anyone who made a purchase before the deadline?

Well, no. Not every home run is eligible—just those hit by Red Sox players…after July 15.

OK, that’s fine—nobody wants free furniture because Ramon Ramirez threw a flat fastball to Carlos Pena. The Red Sox have actually shown a decent amount of power thus far in 2010. And the ball carries well to center during the summer at Fenway. Home runs occasionally glance off the back wall behind section 40 from time to time. And that’s right where the sign is located. There’s a chance!!

Just a second there, Lloyd Christmas. The free furniture thing is limited to homers that hit the small baseball printed on the left-hand side of the sign…(The fine print: The hit will not be considered “direct” if it caroms off another object or is touched by a fan before hitting the baseball on sign.) 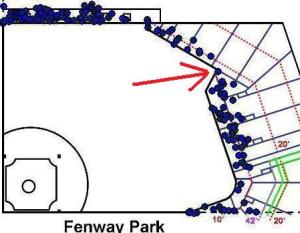 Some of these home runs probably wouldn’t have even appeared as close as Hit Tracker’s scatter plots suggest. Nevertheless, in the most charitable scenario, there is a 1-2% possibility that any given home run has a chance of making a dent somewhere on the sign based on data from the last four years (9 dongs out of a total of 637 hit). But the actual area taken up by the baseball itself is probably something like 5% of the total sign’s space. So in reality, the promotion is akin to a blindfolded shot from half court at a Celtics game where just hitting the backboard would be an impressive accomplishment.

But the trouble isn’t solely that the probability of a “Monster Hit” begins with a decimal point followed by a bunch of zeroes. It could happen. The more glaring reality is that Jordan’s is preying on the dumbest subset of fans by enticing them to bet on the likelihood of a player hitting a specific spot on a sign over 430 feet from home plate at Fenway Park. The possible reward should be more interesting than free second-rate furniture.

So what would be a better reward for customers who buy furniture at Jordan’s based on the possibility that it will be free if someone hits the target?

It has to be something equally as far-fetched. It should be interesting and rewarding for everyone involved. Not just for those who purchased sofas and loveseats. It should universally atone for all the aggravation the company will put NESN viewers through with its incessant advertising spots. It should offset the mental pressure it puts on David Ortiz—Does the slugger’s homerless psyche really need to have a tiny home run target as a backdrop in center field?

It should also punish Jordan’s Furniture for being unoriginal. This promotion is a watered-down version of MasterCard’s long-running sponsorship of targets at the MLB All-Star Game home-run derby event.

At the very least, that guy in their ads should have to cut off his ponytail so that Jade McCarthy and Heidi Watney can use it as a French tickler while enthusiastically hooking up on a memory foam mattress while Don Orsillo and Jerry Remy provide a play-by-play analysis on live television.