The abortive 2012 Red Sox season ended five months ago. The calendar year has turned to 2013. Boston has a new manager and close to half the 2013 big league roster will be different. There is, nor has there been, occasion to think or utter Bobby Valentine’s name for quite a long time. 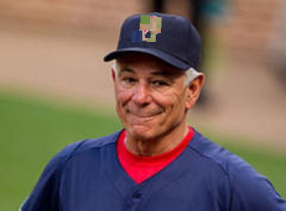 But Bobby Valentine understands that many fans remain heartsick over his departure. He has two eyes and two ears. He has heard players respond to the various barbs he has thrown at  players and management since being fired by the team last fall. He senses that fans feel a debt of gratitude toward him for providing the antidote to the poisonous culture that had infiltrated the locker room prior to his arrival after the 2011 debacle.

However, with Valentine now entrenched in a new journey as athletic director of a small private college in Connecticut , he believes it is fine time that fans move on and forget about him.

To drive home his point that he is finished discussing his run in Boston, Valentine has purchased full-page advertisements in newspapers such as The Boston Globe, Boston Herald, Boston Metro and Providence Journal which will run on a daily basis throughout the baseball season. The spots will ask fans to kindly forget about 2012.

“The point of this ad campaign is, I want everyone to know it’s over now. I am finished talking about it. Starting now. That’s what this is about. These newspaper ads will remind everybody on a daily basis that I don’t think about Boston anymore. Starting right now. I swear. I want fans to open the sports section every day and see my face staring at them and just know I have moved on. Today is a new day. Tomorrow is, too.”

The viral campaign won’t stop there.

“We’ve got some YouTube videos and things that I’m going to post to a Facebook page. I’ll also be appearing at various bookstores around New England to autograph copies of Dan Shaughnessy’s biography of my predecessor, Terry Francona. Oh yeah, also, television ads will run after the top halves of the first, third, fifth and eighth innings of each NESN telecast. That will be a series where I’ll talk about things that happened last year and why they don’t matter anymore. And yes, there is a breakfast cereal in the works too.”

An official press release will be blasted later today providing Valentine’s cell phone number in order to field any and all future inquiries about his time as Red Sox manager, which he is now finished discussing.

This is unacceptable. The “worldwide leader” in sports coverage can’t even get Brock Holt!’s name spelled correctly. Sure, it’s only early spring and all and the Red Sox were facing a college team. But what an embarrassing oversight. How did the ESPN ombudsmen at Deadspin miss this?

Yesterday, Fenway Pastoral ran though the probabilities for OPS+ for the five AL East teams’ lineups, based on the recently released ZiPS projections made available on Google Docs.

For pitchers, ZiPS provides similar probabilities for ERA+, which like OPS+, adjusts for park and league factors to summarize a pitcher’s chances of being above or below the 100 baseline. (A 110 ERA+ means the pitcher’s ERA results are 10% better than league average.)

Unsurprisingly, Jon Lester projects to be the team’s ace, but ZiPS isn’t overly optimistic he’ll be a standout league-wide. The system generally does not see any Red Sox starter as being particularly likely to be a shutdown ace in 2013. However, the system also does not foresee any of the team’s projected top 5 being a pinata either. The Sox should see their fair share of quality starts and, if nothing else, have good consistency from top to bottom.

(Players are listed at right based on projected WAR and their actual ZiPS projection for 2013 ERA+ is provided in parenthesis).

In contrast, the Red Sox could have one of the best bullpens in the majors if things pan out favorably for guys like Koji Uehara and Joel Hanrahan. As a setup man, Uehara’s impact will be minimized by his low innings total, but when he is on the mound, chances are he will be fantastic. Andrew Bailey, meanwhile, acquired at considerable cost last offseason to be Boston’s closer, could very well just be another very good setup guy in a bullpen seemingly stacked with good setup guys.

2013 ZiPS Projections: Probabilities for the Red Sox Lineup and the rest of the AL East

Dan Symborski’s ZiPS projections for the 2013 season were recently made available on Google Docs. Using the OPS metric as a measure of a player’s offensive value will make any serious baseball analyst have kittens. But it is interesting to look at the ZiPS system’s projections for OPS+, which accounts for for park effects and league context, to see the relative floor and ceiling for individual players.

The chart above summarizes each Red Sox player’s chances of topping various OPS+ benchmarks, based on ZiPS. The median OPS+ projection is provided to the right. Players are listed in descending order of total expected WAR.

Barring an unexpected breakout, the Sox may be more reliant on David Ortiz’s offensive production in 2013 than ever before. With a 150 OPS+ forecast, his bat is projected to be 50% better than league average. Meanwhile, Dustin Pedroia and Mike Napoli each have around a 20% chance to be an elite bat (130+) in the AL. The dropoff after that is significant as the team signed two outfielders – Victorino and Gomes – who project to essentially be right around league average (1% better).

For context, the rest of the AL East is provided below. While they have a few younger players who may drag down the lineup, the Blue Jays clearly appear to have the best chance to have a number of players be well above average. While the Yankees have more upside potential than the Sox, there is a clear separation between the top half and bottom half of the lineup. The same can be said about the Tampa Bay Rays. And, well, we got bored halfway through the Orioles… 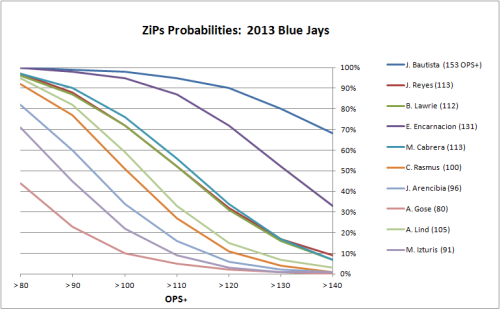 So next time your buddy pulls out his smartphone to check what time a game starts, slap it out of his hand and tell him a real man keeps a pocket schedule in his wallet at all times.

Below, an incomplete chronology (primarily via eBay listings) of pocket schedules for Red Sox seasons over the past six decades:

1953
Some rare pre-cursors to the pocket schedule are occasionally available for sale on e-bay and other sites. This simple green and white design features a shield design that looks a bit like the NFL’s official logo.

1970s
The 1970s featured a number of these simplistic designs. The game time designations – Twi-Night Games! – are especially interesting now. And of course, insert the standard observation that Sox tickets were a lot cheaper back during the Nixon administration (Richard, that is).

Also, the State Street-sponsored edition closely resembled the year before.

1977
Fred Lynn waiting on a pitch and a fantastic old-school TV38 logo.

Also, an alternative edition from Schlitz(!): “Schlitz Brings You the Red Sox ‘77” – The Sox and Schlitz beer: The Perfect Refreshment Team.

1978
An action shot of All-Star shortstop Rick Burleson turning a double play in the shadow of the left-field wall. Labatt’s takes the baton from ‘Gansett and Schlitz.

1979
Dennis Eckersley throws a pitch and, as was often the case back then, Budweiser was involved.

1982
On a team that had Dwight Evans, Jim Rice and Carl Yastrzemski, light-hitting 2B Jerry Remy somehow got the nod.

1983
“The Excitement Builds” – Unassuming but effective. The 1980s were a simpler time.

1984
“Catch Fenway Fever” – Wade Boggs makes the first of several appearances over the next decade.

1985
“Get Out to the Ballpark – Catch Fenway Fever” – This time, Jim Rice is the one doling out the fever. And injecting The Fear into the eyes of opposing pitchers.

1986
“A Boston Tradition” – Wade Boggs taught us how much better a ballplayer’s patience at the plate can be when he has sex constantly. Unchecked aggression of any kind probably makes laying off of a diving curveball in the dirt a hell of a lot more difficult. Maybe Boggs chose the wrong course in getting all blubbery and apologetic on national TV about being a sexual deviant.

Meanwhile, it’s hard to understand what’s happening in this rogue pocket schedule released by Suncook Bank. For one thing, the “players” look to be frolicking in wintry snow rather than playing in a baseball game. The guy in the middle only has one leg. All three guys are clearly wasted. The whole thing could just be a visual manifestation of an Oil Can Boyd cocaine-fueled meltdown…If the stuff were laced with LSD.

1990
“Swing into the ‘90s” with Dwight Evans. A Sox mainstay for a decade and a half, Dewey never got any pocket sked play until he was past his prime. We would love to see this specifically cited in some hack writer’s “Why I Voted/Didn’t Vote for This Guy for the Hall of Fame” column.

1991
“Fenway Fun in ‘91” focused on marketing to a crowd mentality. This a reminder that there was a point in time that The Wave wasn’t completely obnoxious.

1993
An artist’s rendering of a crowded Yawkey Way on game day includes a speech bubble of one fan’s declaration that “Red Sox baseball is the best bargain in sports.”

NESN came out with another:

1996
That NESN spot proved prophetic and the ‘96 campaign was built around the fact that 1995 AL MVP Mo Vaughn was still around. Powerade sports drink took the backside ad space. But even with Vaughn and Jose in the lineup (and both actually better statistically than in ’95), the results of the ’96 season weren’t quite as syrupy sweet as the electrolytes within the Coca Cola-produced sports drink.

1997
Mo Vaughn doing his thing along with Tim Naehring, who saw injuries derail his career (’97 was his last season in the majors).

1998
With Mo headed to Anaheim and the Pedro Paradigm still in its infancy, Nomar takes the reins after winning AL Rookie of the Year in ‘97. 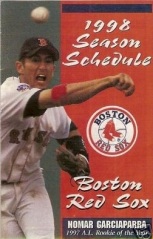 1999
The All-Star Game marketing was in full swing even in the winter of ’99.

2001
100 Seasons, 1901-2001. This edition is appropriately creepy, managing to fit in Babe Ruth staring menacingly at the team logo. By this point, controlled by a corrupt, lame duck ownership group led by John Harrington, the team seemed to strangely embrace the idea that it was haunted by its past – even if it were on a subconscious level. If Dan Shaughnessy somehow became a Photoshop wizard, this is probably pretty close to what he would have come up with.

2004
There were multiple versions released prior to 2004, including skeds featuring Nomar, Jason Varitek and even Bill Mueller, who tied Manny Ramirez for the 2003 batting crown. 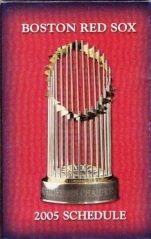 2006
Another year of multiple editions, which included Coco Crisp, Kevin Youkilis, Trot Nixon high-fiving fans and even one with Wally the Green Monster.

2007
The 40th Anniversary of the ‘67 Dream Team. Plus, Daisuke Matsuzaka comes to town. Hood sponsors at least five different editions, including multiple Dice-K releases, one featuring him playing catch with Hideki Okajima.

2008
The Sox celebrating their 2007 World Series win on Coors Field.

2009
“Here Are 162 Reasons to Circle the Calendar.” Other editions say things like “Here. Your Calendar Just Filled Up.” Maybe everything seems cooler with the benefit of a more distanced perspective, but these are the kinds of bad one-liners that get Peggy Olson kicked out of Don Draper’s office. 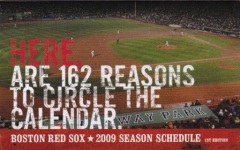 2010
“162 Save-the-Dates” with Dustin Pedroia. Is anybody starting to notice a pattern here? 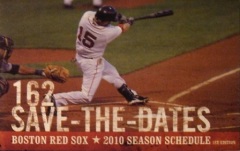 2012
“Fenway Park 100 Years” – Plus, another round of pocket schedules reminding fans of the length of the baseball season – i.e. “162 Ways to Celebrate.”

But this 2nd edition and its “Best Six Months of the Year” tagline is our favorite. Oh, the irony.