Time to wrap a bow around this near perfect offseason, John Henry

That’s great work, John Henry. Bravo. Speedy and Gonzalez in Sox uniforms. This has been like Christmas in December.

Your boy Theo has truly come into his own. He resisted the urge to get in a bidding war with the Yankees for Mark Teixeira two years ago, thus opening the door for the Adrian Gonzalez deal and the Carl Crawford signing. The planned improvements to Fenway Park for 2011 look solid and even Jason Varitek’s one-year deal is difficult to argue against given the existing depth at the position.

Yup, all around, this offseason is about as close to perfect as rational fans could possibly expect of their baseball team. There are only a handful of opportunities for further improvement, John.

Grease Mayor Menino’s palms: Look, this is embarrassing. Boston is a world-class city of culture, renowned artists, top-notch hospitals, esteemed universities and restaurants owned by Nick Varano. There is no good reason why fans in the “budget” grandstand, loge and bleacher sections shouldn’t have the option of purchasing beer without leaving their seat. People like to drink beer. People like to act rowdy and fight. Both are going to happen regardless of how inconvenient the organization makes it for middle class people to purchase alcohol. Business owners with a fraction of your wealth manipulate the city ordinance system all the time obtaining licenses to get their loyal patrons drunk. We’ll even set up the breakfast on Beacon Hill and buy the unmarked security envelope for you if you’d like. How about a nice brunch somewhere near the park? You can bring home the sliced cantaloupe and surprise Linda. She’ll love it.

Stay away from Liverpool for a little while: It’s not that Sox fans are jealous. But you should give those Reds fans some time to cool off. They seem pretty pissed. Apparently, they already had their grape smugglers in a twist last week over the sum of money given to Crawford and Gonzalez. Just wait until they hear about Bobby Jenks…

Establish a “Mustaches Only” facial hair ordinance: Kevin Youkilis. Tim Wakefield. Adrian Gonzalez. Dustin Pedroia. Jed Lowrie. None of these guys wouldn’t look hilarious in a mustache. And if nothing else, it beats Josh Beckett and Jenks sporting matching flavor savers.

Re-sign Manny for right-hand outfield depth: You do want television ratings to be better in 2011 than 2010, no? Ramirez isn’t going anywhere for big money this year and he’s likely to be available at a relative discount sometime before spring training. Seriously, signing Manny actually makes enough sense that if can’t be dismissed outright. We’d be willing to bet Epstein has broached the subject with you already. The lineup is lefty-heavy and the outfield needs a right-handed bat. Darnell McDonald will understand; Gerry Callahan won’t. But really, nine out of 10 scouts are bearish on Danny Woodhead’s chances of improving his outside-zone swing rates and becoming the next Bo Jackson.

Fix the bullet holes and busted concrete on the lower concourse: Chuckie and Don Draper both have wicked bad aim. 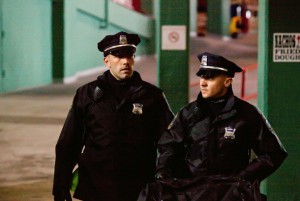 Double burgers at the Fenway Grill will only set fans back $10.50 next season.