Marco Scutaro has been absolutely unconscious this postseason – multi-hit games seemingly every night, pesky at-bats driving pitch counts through the roof, clutch RBIs. What, exactly, is this guy’s secret?

It’s not rocket science: His neck never gets cold.

Red Sox fans can only shake their head wistfully. This guy would have looked pretty damn GQ wearing one of these at Fenway Park in late October. (AP Photo)

A slightly more youthful Scutaro back when he was a bit greener and carefree.

During his stint in Colorado earlier this season, Marco opted for a simple black Nike mock T-neck, almost as though he had some premonition he’d be ending the year on another team with black in its logo… (AP Photo).

The crisp Canadian air meant Scutaro was always prepared for a chilly night as a Blue Jay…even when the team was playing in Texas… (Photo from BlueJays.com) 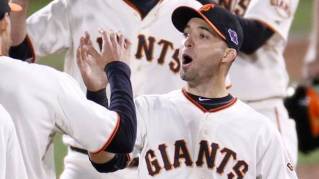 The weather forecast for this weekend in Detroit? Temperatures dipping into the high-30s… (Reuters).