Governor Patrick infuriated nobody told him about the Adrian Gonzalez trade

The blockbuster deal that sent Adrian Gonzalez from San Diego to Boston in exchange for three Red Sox prospects had the region buzzing at a feverish pitch back in early December.

As the nominative head honcho of a state that hemorrhaged jobs over the past two years, Massachusetts Governor Deval Patrick says he would have done everything in his power to block the “3-for-1” deal between the Red Sox and Padres.

“This deal, which I cannot believe I am just hearing about now nearly four months later, is a symbolic disaster for our state’s psyche,” Patrick told Fenway Pastoral earlier this week from a jet flying over the Atlantic Ocean. “If we continue to lose three jobs for every one we gain, the entire state of Massachusetts will be on welfare by…Well, I’m not sure how soon, but probably pretty darn soon.”

“I’d like Mr. Henry to explain to the good people of Massachusetts how he can justify shipping three fine, hard-working blue collar workers (Casey Kelly, Anthony Rizzo and Reymond Fuentes) out to San Diego for but one, already handsomely paid employee from California.”

Patrick scoffed when told all three prospects played out-of-state in 2010 as part of the Red Sox organization’s minor league affiliates in Greenville, S.C. (in Rizzo’s case) and Portland, Maine.

“I’ve glanced over the projections. The fact is all three of those guys would have likely been tax-paying workers residing in Massachusetts within the next three years,” says Patrick. “Theo Epstein should be fired for orchestrating such a crooked deal and the ownership group should be levied a heavy fine for this heist.”

The Governor was not finished.

“Curt Schilling should be punished as well. I’m positive he had something to do with this,” he fumed. “He should be ashamed of himself.”

Told of Gonzalez’s beautiful, inside-out batting stroke from the left side of the plate that should nicely complement right-handed Kevin Youkilis, Patrick only sounded more infuriated.

“Well that’s great, but who the heck are they going to get to play left field now that Jason Bay is gone?” 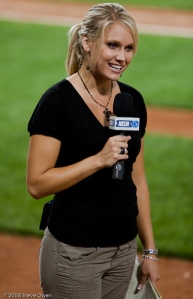 CARVER, Mass.—Francis Flynn never bothered opening the owner’s manual that came with his new iPhone. As the owner and primary caretaker of nearly 10 acres of cranberry bogs, Flynn says he doesn’t have the time to learn too many of the smart phone’s bells and whistles.

Just having access to the inner thoughts of his favorite NESN television personality, Heidi Watney, is plenty stimulation enough for Flynn, who let his beard grow scraggly thick during a particularly desolate, snowy winter that left his fields in a depressing, dire condition.

“I stumbled on Heidi’s Twitter account one day while I was trying to order a couple of replacement parts for my tractor—it took a pretty good beating during all the storms in January,” Flynn explains.

“I was on the phone with the supplier and all of a sudden I heard a strange ping noise and there was a message congratulating me on setting up an account. Turns out I had accidentally tapped some shortcut button while I was trying to talk and wipe fresh bog soil off my nose at the same time. I’m still waiting for that fuel hose for my engine…But obviously God planned for my tractor to stall out so that I’d find Heidi on Twitter.”

Up to this point, NESN’s Number One Blond Bombshell—(“You better get off my goddamned bog if you think Kathryn Tappen is better,” Flynn says, unsolicited)—has primarily used her account to notify fans of daily lineups, to relay tidbits picked up in her interviews and to wish her many followers ‘Happy Birthday.’

But Flynn believes @HeidiWatney will evolve into so much more and he intends “to be there when she slips up and posts some kind of inappropriate photo of herself in front of her bathroom mirror or something.”

In the meantime, Flynn says knowing the Red Sox batting order in advance of the game broadcast—well before he’s even close to done for the day working in his bog—is a pretty nice perk.

“Heidi has the lineup posted a few hours before the first pitch,” Flynn says. “I’m out there in my tractor around quarter of four already asking myself if Francona’s doing the right thing hitting Jarrod Saltalamacchia fourth. I love it.”

Flynn, who has experienced his fair share of Heidi obsession and fatigue over the years, is downright giddy at the prospect of being connected to her 24 hours a day throughout the upcoming regular season.

However, he has taken note of some significant drawbacks.

“Certain news, I’d rather hear straight from Heidi’s face on a television screen,” he says.

Flynn was devastated when he heard news of Daniel Nava’s demotion to the minors while trying to call the Plymouth County Animal Control office to report a dead coyote that was rotting in one of the far reaches of his bog.

“It was really tough to have to hear about Danny that way…on a damn phone. I knew it was coming, but I really thought Heidi and I would share that moment together on TV…not on some social networking site. It felt so impersonal.”

Asked if he planned to follow Red Sox stars such as Jacoby Ellsbury and Saltalamacchia, who also recently joined Twitter, Flynn didn’t have to think long for his reply.

Peter Gammons tweets ‘P’: WHAT DOES IT MEAN??

Thinking on this whole thing rationally after a tortured, sleepless night, there are really only a handful of explanations for the message, which will now be presented forth in a classic “polyletter,” “multiword” (if you will) written technique that we employ not to rival, but only to attempt to explain the meaning of Gammons’ post-postmodern, uber-brevity.

P Theory #1: Gammons was beginning to speculate on a possible landing spot for (P)ujols, Albert, baseball’s best player who also happens to be on a collision course with free agency and a $300 million contract this fall. However, his inside source got cold feet as he began clicking away on his Blackberry.

Back in the old days with the Boston Globe–when people read the paper’s Sunday Baseball Notes column unironically– Gammons had a knack for tossing conjecture out into the open for public consumption. If Twitter existed back when Peter was on the phone 20 hours each day during baseball season, talking to executives and insiders nonstop, just sending out the first letter of a last name would have been a pretty major deal.

P Theory #2: Peter is employing the Little Orphan Annie Decoder Ring methodology: Each day, baseball fans need to visit @PGammo on Twitter in order to obtain the next letter in the long, elaborate message. Who knows, tomorrow’s letter might be an ‘E’ and the day after could be a ‘D’, then an ‘R’, then an ‘O’……and then Peter would probably get sick of stringing everyone along like a goddamn maniac and just finish on Sunday with “will sign with the Red Sox and be ready to take over the No. 5 spot in the pitching rotation by mid-June.” Note: For the WEEI listeners trying to read this blog, that first word fully spelled out is “Curt Schilling.”

P Theory #3: Peter flew back to Boston from Florida because he had front row seats for the Lady Gaga concert at the Garden Tuesday night and began describing something he saw as she strolled toward the edge of the stage: ‘P’… Then he thought better of it.

P Theory #4: The last theory is also the most far-fetched of all the P Thoeries set forth in this space. In some miraculous convergence of universal improbability, Peter did not lock his smart phone and, as it jostled around haphazardly in his suit jacket, the proper combination of buttons was somehow pressed, not only opening the Twitter application and signing into the @PGammo account, but also typing the capital letter ‘P’–which just so happens to be the first letter in either the first or last names of numerous prominent baseball stars who may or may not be rumored to be on the move this season, according to top baseball executives and industry insiders.

Now, you tell us who’s crazy…