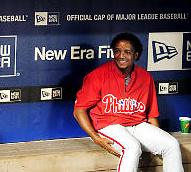 Laughing our asses off at the Yankees’ Bartolo Colon signing was fun while it lasted (several side-splitting hours). But what if they get really slap-happy with former aces from the early 2000s and sign Pedro Martinez?

Why even bring it up this early? Because perhaps the more it is talked about now, the lesser the chance it actually happens later.

Martinez signing with those rat bastard Yankees at some point this season just seems to make too much sense as of this moment. Pedro hasn’t decided if he’ll pitch in 2011 yet. But he loves attention and New York loves fawning over its over-the-hill athletes. The Yankees will need another starter, perhaps not right away, but sometime in June, right when Martinez would likely join a team.

Meanwhile, Brian Cashman isn’t exactly the only one with his hands on the purse strings. (Yes, the Yankees carry their money in a very large purse. It’s not even European…)

It is highly unlikely that Pedro would sign with a team unwilling to both guarantee him a starting rotation slot and pay him the guaranteed money for a few months of his service. The Phillies paid him a base salary of $1 million in 2009 for 61 2/3 innings, including the 17 he pitched in the postseason.

After their embattled offseason, the Yankees may be the only team that can both extend him the “respect” of a seven-figure guarantee and a surefire spot in a contending team’s rotation. Last season, it was fun for Sox fans to imagine Pedro coming back to pitch effectively for some random NL contender. Seeing the legend get by on wile, guile and style alone for Philly in 2009 was oddly intriguing. Any Sox “fan” still begrudging him four years later for his departure in 2005 was, well, probably complaining how “boring” the team was last season anyway.

This season? John Henry and Theo Epstein might just have to bite the bullet and make sure if Pedro does indeed want to pitch again for a team in the Northeast, the Red Sox are the first and only team Martinez calls. Because Pedro in Pinstripes may be the only Fenway sight more perverse than the New Kids on the Block defiling the outfield later this summer.

Boston clearly has a case of team

mascot depravity on its hands.

In an unwelcome attempt to lure NESN Daily co-anchor Jade McCarthy into a behind-the-scoreboard rendezvous earlier this week, Red Sox fan favorite Wally the Green Monster has reportedly sent a nude photograph of his green-haired body, sporting nothing but his trademark Red Sox hat and a smile.

McCarthy wasn’t entirely sure what she was looking at Monday morning, when she first opened the text message on her iPhone. Team officials are unsure if Wally acted alone in the impromptu photo shoot while sitting inside Fenway Park’s famous left-field wall.

Insiders say it wasn’t the first time McCarthy had received a correspondence from the cell phone number she recognized to be that of Wally the Green Monster. But past messages were typically friendly, albeit indecipherable—letters, numbers or symbols jumbled together nonsensically. The fat-fingered Wally’s inability to properly type on his mobile phone was generally dismissed as a funny quirk amongst team employees.

But evidently, Wally’s frustrations were not limited to just the functionality of his mobile device. Things finally reached boiling point earlier this week.

The Wally sexting news comes just days after professional lacrosse’s Boston Blazers mascot, Scorch, was taken to task for receiving multiple lap dances during an ill-conceived halftime show at the TD Banknorth Garden this past weekend.

Harvard psychology professor Jennifer Houston was not surprised by the mascots-behaving-badly story angle that has peaked on the local radar during the past week.

“Most of the time, these mascots are deeply troubled individuals because so much of their lives is spent rooting for causes other than their own,” she said. “How can Wally respect himself as a member of society? He represents an inanimate object constantly being peppered by hard-hit line drives. It’s really no surprise he would so callously treat women with such insensitivity.”

“I’m sure what Jade saw was nothing she couldn’t have found on the Internet using basic Boolean search logic,” she said. “Heck, maybe she’s into it. But I think more likely she will look like a deer in the headlights on camera for a little while after dealing with this whole perverse ordeal.”

One Red Sox official says the team is still trying to confirm that the flowing green fur that is so abundant in the photograph is indeed Wally’s.

“We have no further comment on the issue at this time. In the meantime, we’d like to remind fans that Wally the Green Monster and the 2004 and 2007 World Series trophies will be parading through Nashua, Portland and Woonsocket this weekend. Come join in on the fun!”

Lucky the Leprechaun, who left the Celtics organization in 2009, was unavailable for comment on this story. When visited at his home unannounced, a distraught Pat the Patriot could be seen snorting angel dust off the bare stomach of a Boston Bruins Ice Girl.

So much for January being a slow news month.

Known to go entire relief appearances without blinking his eyes even once, Pap’s close friends cited health reasons for the change. Papelbon, who suffers from occasional migraine headaches, would like to cut his caffeine intake as part of his New Year’s resolution—the other parts presumably being an $11 million salary and some improvement in his ever-diminishing K/BB rate.

The news had executives at Boston ad agency Hill Holiday scrambling as it likely jeopardizes the firm’s much anticipated 2011 campaign, “Drink Dunkin’ Iced Coffee or else Jonathan Papelbon Will Sit On Your Face and Fart.”

Said one key employee working the account, “We’re not too worried yet, but ‘Drink Dunkin’ Iced Coffee or else Bobby Jenks Will Sit On Your Face and Fart’ doesn’t quite have the same ring to it.”

“One of the reasons we upgraded the bullpen bathroom facilities this offseason is because of all the coffee Jonathan was making his teammates drink out there,” said one front office source. “Caffeine is a natural diuretic.”

Closer-in-waiting Daniel Bard, meanwhile, spat out his Folgers upon hearing the news.

Fenway Pastoral will have more on this story as it develops.