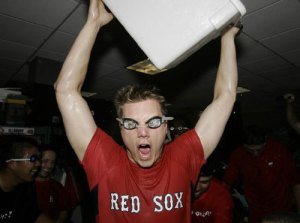 So much for January being a slow news month.

Known to go entire relief appearances without blinking his eyes even once, Pap’s close friends cited health reasons for the change. Papelbon, who suffers from occasional migraine headaches, would like to cut his caffeine intake as part of his New Year’s resolution—the other parts presumably being an $11 million salary and some improvement in his ever-diminishing K/BB rate.

The news had executives at Boston ad agency Hill Holiday scrambling as it likely jeopardizes the firm’s much anticipated 2011 campaign, “Drink Dunkin’ Iced Coffee or else Jonathan Papelbon Will Sit On Your Face and Fart.”

Said one key employee working the account, “We’re not too worried yet, but ‘Drink Dunkin’ Iced Coffee or else Bobby Jenks Will Sit On Your Face and Fart’ doesn’t quite have the same ring to it.”

“One of the reasons we upgraded the bullpen bathroom facilities this offseason is because of all the coffee Jonathan was making his teammates drink out there,” said one front office source. “Caffeine is a natural diuretic.”

Closer-in-waiting Daniel Bard, meanwhile, spat out his Folgers upon hearing the news.

Fenway Pastoral will have more on this story as it develops.

This entry was posted in Red Sox, Sports and tagged Jonathan Papelbon. Bookmark the permalink.