Sometimes the reality, when all is said and done, just doesn’t quite measure up to the expectation. Red Sox utility player Mike Carp came into the 2014 season expecting to be written into the lineup quite a bit more often than he has. At the very least, he figured to be a tough-out left-handed hitter who would come off the bench in later innings and force the opposing team to perhaps burn one of its southpaw relievers in order to swing the platoon advantage. That of course, hasn’t happened all that much – Carp has only played in 36 games. Put in more simpler terms, there is a natural gulf between the optimism of a prototype and the harsh truths of the final product.

Take, for example, this lifelike graphical presentation of a Mike Carp Commemorative 2013 World Series bobblehead listed on the MLB Shop via RedSox.com: 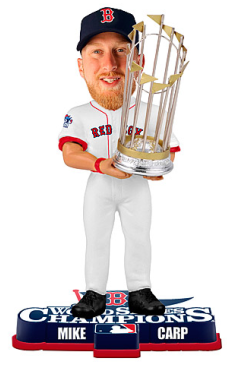 Then, imagine you’re a rabid Mike Carp fanatic and you have just received this in the mail after a tortuous two-week wait while the merchandise wended its way through the U.S. Postal Service: 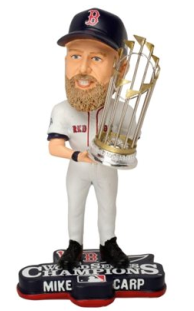 Then, and only then, do you revisit the product page and read the fine print tucked away near the bottom of the page: Design of product is subject to change. 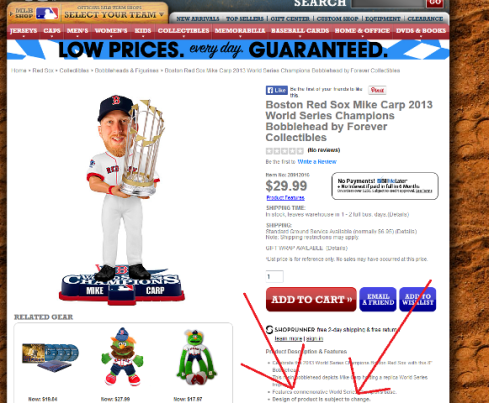 Now that the truth is staring – no, more like nodding – at you square in the face, there’s only one thing left to do. Box that thing up like it’s still brand new and sell the thing on eBay to the highest bidder.

This entry was posted in Red Sox and tagged Mike Carp. Bookmark the permalink.