On the brink of elimination during the 1986 ALCS, the Red Sox staged a ninth-inning rally to tie Game 5 and eventually win 7-6 in 11 innings. This one probably gets forgotten in the annals of Boston sports history thanks to recent championships and, of course, the gold standard 2004 ALCS Comeback.

*Disappointingly, the ABC footage posted to YouTube does not include most of the graphics used by the network throughout the broadcast. At one point during the first inning, Michaels discusses how valuable Wade Boggs is because he draws so many walks and the network posted his OBP. Michaels explains, “There’s something in baseball called on-base percentage…”

00:22: The video includes about 20 minutes of ABC pre-game analysis. Al Michaels explains the simple mathematics for Boston and its need to win three games in a row. As recently as 1984, the Red Sox would have already been eliminated as part of the former Best-of-5 LCS format.

1:22: Michaels recaps the night before as Roger Clemens took a shutout into the ninth inning before giving up a leadoff home run and putting on a couple of baserunners, who would both score to tie the game thanks to an uncharacteristically poor performance from Calvin Schiraldi, who had a 1.41 ERA in 51 innings in 1986. He had just five appearances in which he had a negative win probability added (WPA).

2:13: In retrospect, Deborah Schiraldi was maybe a bit too excited that her husband got a couple of strikes on Brian Downing. Cal tried a two-strike curveball that dove so far inside that it hit Downing.

3:37: The Sox would lose in extra innings when a Bobby Grich single drove in Jerry Narron. Losses don’t get any more heart-wrenching than this right?

4:30: ABC had not only Jim Palmer doing color commentary in the booth with Michaels…

5:13: But also Don Drysdale for an on-field interview such as this pre-taped bit with Sox manager John McNamara.

18:49: As you can see in this establishing shot, the left-field bleachers at Angel Stadium are conspicuously empty. It’s almost like the fans are avoiding potential home run balls for some reason.

45:35: With a runner on first base, Rich Gedman ropes an inside pitch from Mike Witt that stays up just long enough to land in the seats near the right-field foul pole. Boston takes a 2-0 lead. (Michaels notes that Gedman hit two home runs all season at Fenway but had three jacks at Angel Stadium during the ‘86 regular season.)

1:04:36: Hard contact off Hurst continues as Gary Pettis sent a single up the middle to follow Boone’s homer. The whole Boone family is just the worst.

1:05:33: Former Red Sox shortstop Rick Burleson was California’s leadoff hitter. During his second at-bat, he would lay down a sacrifice bunt that got Pettis to second with one out. But Pettis would wind up being stranded. 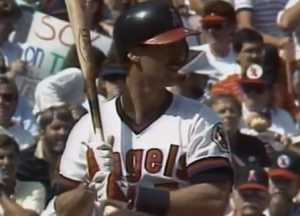 1:13:04: There are some impressive beards on the 2013 edition of the Boston Red Sox, but Dwight Evans’ mustache is a thing of legends.

1:23:08: After a Reggie Jackson single, Hurst caught Jackson leaning and Buckner made a great swipe tag to finish the bottom of the 4th. 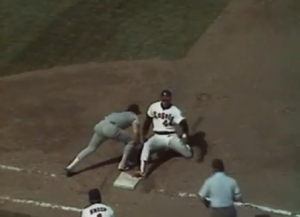 1:26:14: Red-hot Rich Gedman follows his 2nd inning home run with a double off the left-center wall in the 5th. He would be stranded.

1:36:45: With Wade Boggs on first base in the top of the 6th, Marty Barrett lays down a bunt that rolls just in front of the mound for Witt, who fields it and throws Boggs out. 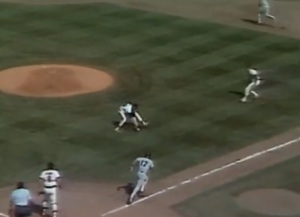 1:36:51: Boggs makes his feelings known, but replays showed he was indeed out. With the No. 3 hitter Bill Buckner on deck and no one out, Barrett’s surrendering an AB was a questionable decision. Boston missed what may have been an opportunity to break things open as Buckner and Rice both made outs to finish off the inning. 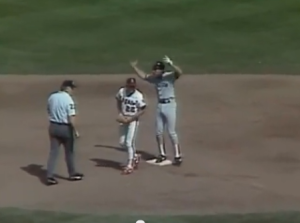 1:40:51: More than anything, it seems like the poster-board outwitted this Angels fan…

1:48:15: Bobby Grich’s long fly gets the extra help it needed to make it over the fence from Dave Henderson’s glove, giving the Angels a 3-2 lead in the bottom of the 6th. Henderson, who came into the game an inning earlier as a defensive replacement for Tony Armas, nearly made the catch of his life. Instead, his momentum would carry his arm, the glove and, most importantly, the ball over the fence. 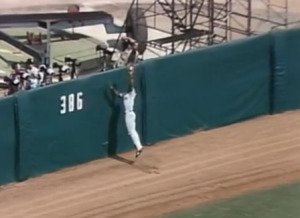 1:49:52: In the aftermath, as the Sox get ready to bat in the 7th, Michaels and Palmer shed their blue CBS suit jackets. Al gets a bit swept up in the moment, saying “this [Henderson’s misplay] could be one of the more memorable plays of the 80s.” Forget for a moment that Al Michaels called the 1980 U.S. Olympic hockey team’s gold medal run and just take note of the following:

a. The game is only two-thirds in the books
b. The Red Sox trail by only one run
c. As a decade itself, the 80s were only about two-thirds complete in October 1986 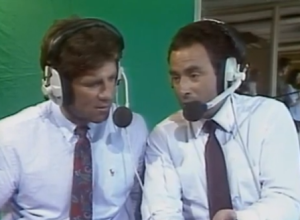 2:02:55: Bob Stanley runs into trouble in the bottom of the 7th and a seeing-eye single by pinch-hitter Rob Wilfong up the middle plates another run. Gary Pettis would score on a sacrifice fly a batter later. 5-2, California.

2:08:26: In dire need of runs, the Sox pinch-hit rookie Mike Greenwell for Spike Owen. Greenwell had spent much of 1986 in Pawtucket. He would lead off the top of the 8th with a single and be replaced immediately by pinch-runner/infielder Ed Romero (Boston wasn’t too interested in having Greenwell play SS in the bottom half of the inning). But the Sox couldn’t get Romero home. 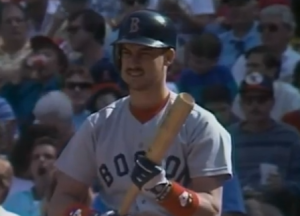 2:15:38: ABC: “Another Boston Catastrophe.” Meanwhile, Michaels sets the stage as Buckner digs in, “Witt on the mound and security at the ready…” 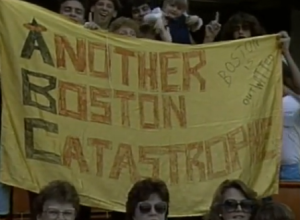 2:18:08: Just as they showed Cal Schiraldi’s wife the night before, here’s Lisa Witt. The obligatory wife/girlfriend shot is just a bad omen that is not worth the potential pain. Buckner singles to center to begin the inning. Buckner hobbles off the field for a pinch-runner as his knees barely allow him the 90 feet to first base. 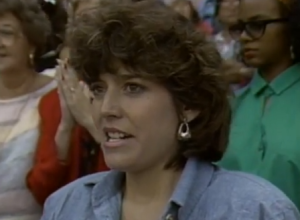 2:20:50: Donnie Moore gets loose in the bullpen, but Witt punches out Jim Rice and seems to still be sporting effective stuff. 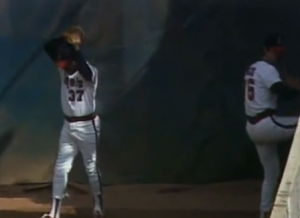 2:24:58: Witt hits his spot on the outside corner here, but Don Baylor reaches out across the plate and somehow manages to pull this outside fastball over the left-field fence. Al Michaels, sounding on the verge of orgasm, exclaims “What a GREAT series!” 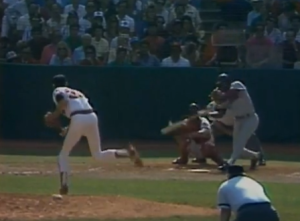 2:27:19: With Rich Gedman (three hits, including a HR and a double) due up, the Angels make the call for the left-handed Gary Lucas. Mike Witt debates openly how in the world he’ll explain this to his wife… 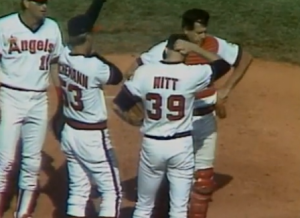 2:28:37: Lucas hits Gedman’s right arm on the first pitch, narrowly missing his head. The Angels are forced to bring in Donnie Moore to face Dave Henderson.

2:30:35: Moore gets two strikes on Henderson. The field is lined with security and other team personnel. 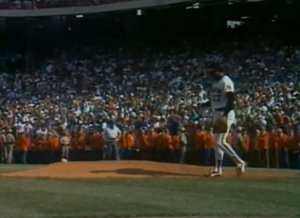 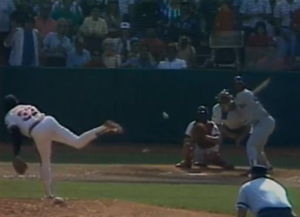 2:32:03: “And Downing goes back and it’s gone. Unbelievable…” Henderson homers to left field, not far away from where he helped along Grich’s two-run shot earlier in the game. Boston takes a 6-5 lead. There are a few more people in the sunny left-field bleachers than at the start of the game… 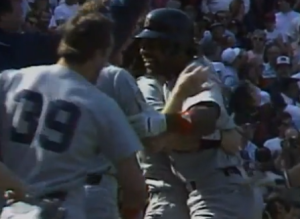 2:39:41: Bob Boone gets a base hit to lead off the bottom of the 9th. Gary Pettis moves pinch-runner Rupert Jones to second base. All of this, Michaels points out, while the shadows created by a stadium-top flagpole that briefly waves around directly in front of the hitters’ line of vision.

2:41:35: McNamara lifts Bob Stanley in favor of the lefty Joe Sambito to face Wilfong, who immediately singles to right. Jones slides in safely behind Gedman’s left foot despite a strong, on-the-mark throw from Dwight Evans.

2:43:41: With Schiraldi having worked the day before and Tom Seaver on the shelf with a sore knee, Steve Crawford comes in for Sambito with the winning run on 1st base and one out. Crawford gives up a single that gets Wilfong to third base; puts Doug DeCinces on first base with an intentional walk; then gets out of the 9th inning by inducing a shallow fly to right and a broken-bat comebacker to the mound.

2:55:48: After a Boggs walk to start the 10th, Barrett once again(!) bunts hard enough down the first base line that a force out is made at second. The play proves costly as Dave Stapleton would follow with a single that gets Barrett to third. But Jim Rice hits into a double play and, like the 6th inning, the Sox are held scoreless in the 10th because Barrett gave away his out.

2:59:29: Nothing of note really happens for California in the bottom half of the 10th. So let’s just take quick note of Reggie Jackson’s CHiPs-inspired sunglasses. 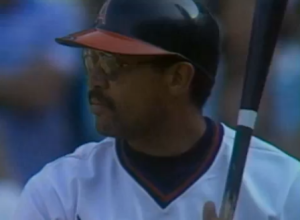 3:10:53: With a runner on first, Gary Pettis takes a pitch the other way and Rice makes a jumping catch at/on the wall. The ball may not have been a home run, but anything but an out and the game is otherwise over. 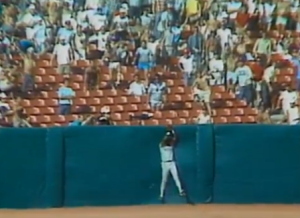 3:12:45: Fittingly, Don Baylor gets hit by a pitch to begin the 11th. He led the majors in HBPs in 1986 with 35(!!). In the background of ABC’s sound feed, the Angels Stadium PA can be heard announcing, “That was the first time that Don Baylor has been hit by a pitch in an ALCS game.” If you listen closely, you can kind of detect the snark. 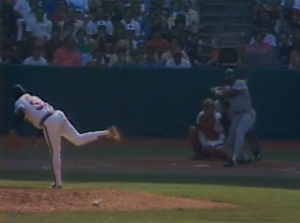 3:17:22: After an Evans single, Gedman pops a ridiculously bad bunt about 10 feet in the air that serendipitously lands free of spin in no-man’s land. Bases loaded…

3:17:42: And then everything goes to shit for Boston? No, the feed cuts out and returns for the bottom of the 11th. Begin speculation on conspiracy theories as to why there is no archive footage available of Henderson’s sacrifice fly that scored the winning run. However, it feels almost fitting that the play that technically gave the ballgame its end isn’t even worth the trouble. Similar to the 2004 ALCS, the capacity for drama after Games 4 and 5 proved limited. 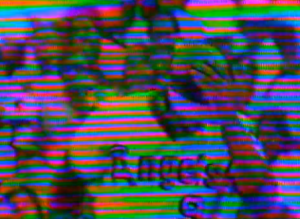 3:20:52: Anyway, Schiraldi would wind up finishing the Angels off in order in the 11th, notching two strikeouts and looking much like the dominant reliever he had been throughout the 1986 season. And Mrs. Schiraldi would get the last laugh.

California went on to lose the series in seven games as Boston went home to Fenway and outscored the Angels 18-5 (Game 6 and Game 7 box scores). The franchise wouldn’t make its first World Series until 2002. By then, Gene Autry could only watch on from his perch in heaven, a place where we assume Thundersticks shall make no sound for all eternity.

One response to “Screen Grabs from MLB Classics on YouTube: 1986 ALCS, Game 5 – Boston at California”