Today we continue our look at Red Sox Classics on the MLB YouTube channel with a recap of Game 3 of the 1999 ALCS. Nine years after the 1990 ALCS marquee pitching matchup between Dave Stewart and Roger Clemens turned into a blowout, a similar result came from a hugely anticipated Clemens v. Pedro matchup. As it turned out, this was only Part I* of what would be several gigantic Red Sox-Yankees postseason games started by two of the most accomplished right-handed pitchers to play in the modern era.

*The 2003 ALCS featured two Pedro v. Clemens matchups — games that wound up being infamous for reasons other than the teams’ starters entirely. Game 3 at Fenway was Pedro’s showdown with an obviously psychotic Don Zimmer. And, of course, Game 7 at Yankee Stadium…otherwise known as Grady Little’s Last Game.

00:04: FOX starts off with the blimp shot from the Charles. It really is a playoffs must.

00:22: It had been three years since Roger skipped town. Some fans were still pretty bitter. It’s almost like Bostonians hold grudges for longer than most. 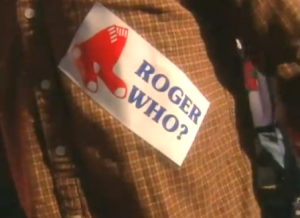 00:45: Simpler times for Keith Olbermann. His colleague Steve Lyons calls it the greatest pitching matchup Fenway has ever seen.

1:51: A very spikey Roger explains in a pregame interview it’s not “just another game”…

5:53: Pedro’s statistics in 1999. Even 14 years later, many Sox fans can come close to reciting these particulars verbatim. His 2000 season was nearly as good, but ‘99 has to be the absolute pinnacle considering what he did in the playoffs – especially five days earlier in Cleveland (as we recently rehashed here).

6:34: And of course, announcers rarely fail to mention the potential impact shadows and setting sunlight may have on batters and fielders. Extra points to Fox and Tim McCarver for mentioning the Lou Pinella play from the 1978 one-game playoff in which he nearly lost a Jerry Remy single behind him due to the sun. 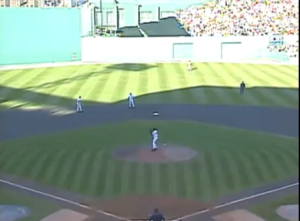 9:05: Fans with K signs on a 3-2 count to Chuck Knoblach, who doesn’t oblige and flies out to right field.

10:31: Jeter singles to left with one out. There is audible disappointment that the chance for a no-hitter is done so early. 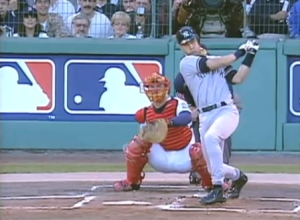 17:00: After a Bernie Williams strikeout, FOX forgoes a commercial break after the top of the 1st inning in order to air Fenway’s reception to Roger as he takes the mound. 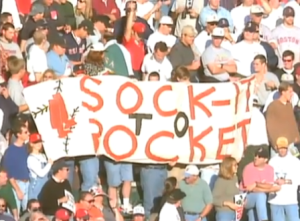 20:08: With the crowd serenading him with a loud “Rooooger” chant, Clemens badly misses the outside of the plate to Jose Offerman on his first pitch. Offerman would hit a well-placed ball to the right-field corner for a stand-up triple.

23:54: John Valentin would follow that up with a two-run homer into the screen on a letter-high fastball.

26:16: Follow the path of Paul O’Neill’s glove here and you can see where the throw from Chuck Knoblach on a routine Nomar Garciaparra grounder would wind up. Just not even remotely close to the bag…A total of 15 of Knoblach’s league-leading 26 errors that season were throwing errors. 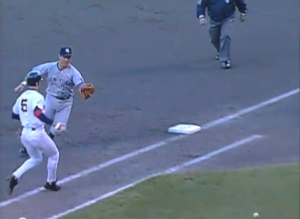 34:39: FOX’s producers were absolutely obsessed with the “sunsplashed Fenway” angle of this game right from the start. They just could not get over it. Meanwhile, those fans who weren’t blinded by the mythological light of the burning sun saw Pedro Martinez strike out Tino Martinez by throwing four nasty change-ups in a row.

37:47: The Pedro vs. Rocket “K” comparison. Martinez would eventually strike out Ricky Ledee for his fourth straight punch-out, ending the 2nd. 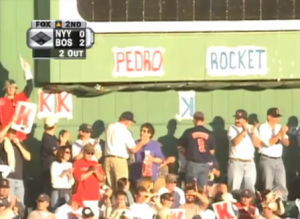 46:33: One out. Runners on the corners. John Valentin at the plate. Jimy Williams in his pants. Valentin would wind up driving in Trot Nixon from third on a fielder’s choice chopper to shortstop. 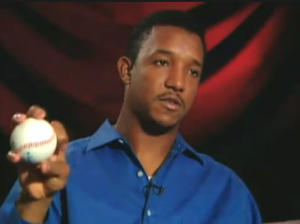 1:05:25: Jetes does his trademark lunge over the plate to make sure the umpire is paying attention to a perfect backdoor curve.

1:08:17: It appears to blow Tino Martinez’s mind that Joe Torre has decided Roger’s had enough after putting the lead man on in the bottom of the 3rd.

1:17:06: Excluding his infamous failure to hit three home runs for a boy on his hospital deathbed in a 1995 Seinfeld episode, this is THE signature image of Paul O’Neill’s career – his head turned so he can argue over his shoulder with the umpire on a called third strike on his way back to the dugout. Seven strikeouts for Pedro. He finished the 4th striking out Chili Davis for his eighth K. 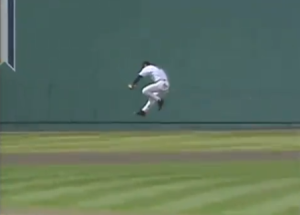 1:46:33: With Boston up 8-0 in the top of the 6th and Pedro cruising, Fox makes sure it fits in the obligatory “Bambino” curse nonsense, complete with vintage Babe Ruth footage. Joe Buck goes deep with it and brings up Harry Frazee, No No Nannette and Ed Barrow. 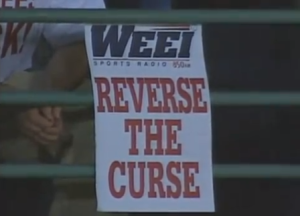 1:49:30 / 2:03:23: Finally, Fox snaps out of the masturbatory “curse” rehash to roll out some useful, relevant graphics after Pedro strikes out Jeter for his 10th K of the game. One can only imagine what Pedro’s 1999 stats would have looked like if he pitched for a National League team. Thankfully, we’ll never know.

The 13-1 Game 3 win would be Boston’s only victory against New York in the 1999 ALCS.The Red Sox simply didn’t have enough of a staff around Pedro to get him another ALCS start on the road in New York. The much-hyped Pedro-Clemens match-up would be the last appearance of his historic ‘99 season.

One response to “Screen Grabs from MLB Classics on YouTube: 1999 ALCS, Pedro v. Clemens I”