This Week in Boston Baseballing, November 1 – 7

With the conclusion of the victory parade on Saturday afternoon, the Red Sox officially entered the 2013-2014 Hot Stove Season. The team figures to garner a broader share of the local media’s attention this winter. At this time late last year, the team ranked a distant fourth in the local sports consciousness. The Bruins were enjoying a torrid start to the 2012-2013 season, which ended with an appearance in the Stanley Cup Finals; the 2012 Patriots would make it to the AFC Championship; and the Garnett/Pierce/Rondo-helmed Celtics still had fresh legs and remained in the discussion as Eastern Conference contenders up until early February.

The Red Sox Victory Lap Goes National
The Red Sox disembarked the duck boats Saturday afternoon, but the victory rallies and 2013 Fall Tour continued. First, some of the Red Sox stopped by Gillette Stadium in Foxboro for a ceremony during the Patriots vs. Steelers game on Sunday. 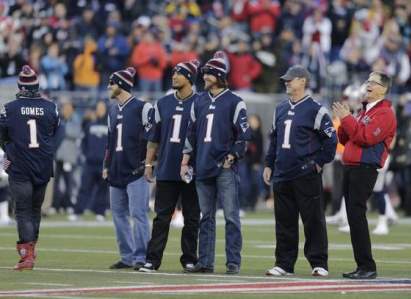 @ShaneVictorino said “every little thing is gonna be alright” if you guys were wondering… Go #Pats pic.twitter.com/3I9ChqTEHH

On Monday night, the freshly shaven David Ortiz stopped by The Late Show with David Letterman. 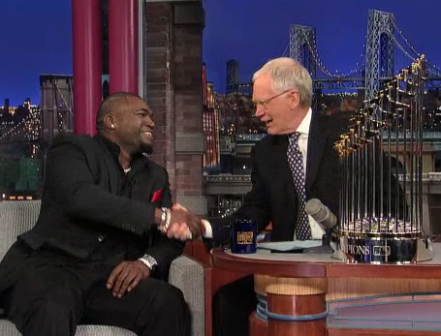 Big Papi hung out in New York until Tuesday morning, when he appeared on Live with Kelly and Michael. 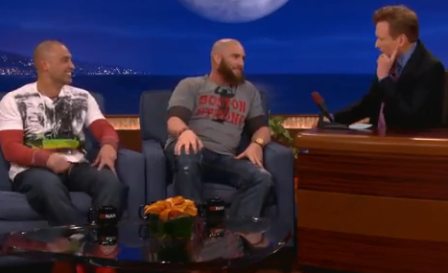 The 21st Century Red Sox And Their Place In History
On NBC Sports’ Hardball Talk, Joe Posnanski writes that the post-2000 Boston Red Sox may just be the modern version of a baseball “Dynasty.”

Posnanski also brings up Bill James’ place in this decade-long run of success.

Finally, Bill James. As mentioned, he seems to be the highest-ranking front-office guy — not counting the executive guys like president Larry Lucchino and owner John Henry — to have been around for all three championships. It’s hard to say exactly what Bill does for the Red Sox. He’s very discreet about it, and he would never take any credit whatsoever for Boston’s success. It was funny to see Jonny Gomes, in the glow of winning a World Series, choose to rip sabermetrics — a word Bill James coined — since I’m guessing it was probably some sabermetric thinking that got Gomes to Boston in the first place.

In a way, it is ironic how difficult it would be to quantify how much James’s post with the team has contributed to the overall success of the team over the past decade. It would be way too simplistic to credit any single member of the organization with the bulk of the accolades. But it’s not hard to imagine that him playing a significant role behind the scenes.

Boston Begins Hot Stove Window Shopping
Boston kicked off the process of building its 2014 roster on Monday. The team offered qualifying offers to Jacoby Ellsbury, Mike Napoli and Stephen Drew. Surprisingly, it declined to extend the same offer to now-free agent catcher Jarrod Saltalamacchia. The team appears like it already has a plan that does not include Salty even though some recent reports indicated the team has been in touch with Saltalamacchia’s agent.

Heard this prediction from two rival officials Monday: Brian McCann will sign with the Red Sox. “They need catching help now,” said one official, “and he could do that for a couple of years and then move to DH after David Ortiz finishes.”

Olney further discussed the prevailing assumption within the industry that Boston will sign McCann on Thursday, when he went on Keith Law’s Behind the Dish podcast. To paraphrase Olney, given “reasonably similar offers, a personal endorsement from David Ross” may be the deciding factor in landing McCann. With a guy like Blake Swihart likely at least two years away, McCann could handle the bulk of the duties for the next couple years behind home before moving to a 1B/DH role if/when Swihart continues developing.

The Giancarlo Stanton Possibility
The Boston Herald’s Scott Lauber speculates on how it might happen and who it might take:

Start with an elite pitching prospect. With the exception of Bogaerts, 21-year-old lefty Henry Owens is about as untouchable as anyone in the organization, especially after posting a 2.67 ERA and striking out 169 batters in 135 innings in a season that ended in Double A. But with Brandon Workman having emerged as a full-time major leaguer, and Drake Britton, Allen Webster, Rubby De La Rosa, Anthony Ranaudo and Matt Barnes not far behind, the Sox may be able to make the sacrifice.

Lauber goes on to suggest that Felix Doubront and potentially Will Middlebrooks could be part of a package to lure Stanton out of Miami.

Meanwhile, if you prefer to digest your unsubstantiated Hot Stove rumors from other tabloid publications, the New York Post’s George King claims the Red Sox are hot on the trail of Carlos Beltran.