The Youker Files: An Old Friend Offers Boston His Congratulations

Earlier today, former Red Sox corner infielder and friend of the site, Kevin Youkilis, penned a nice note to his fans and readers at Fenway Pastoral. 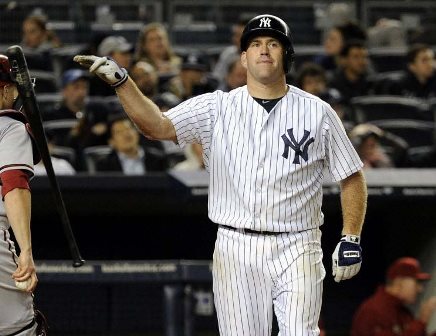 They did it, you guys. I’m really happy for all my old teammates up in Boston for winning the 2013 World Series last week. I’m sure there are some people out there who think I cheer against the Red Sox now since I got traded to Chicago in 2012 and then played for the Yankees this year. After all, I was one of basically a handful of that really awesome core of dudes who brought glory back to the city back in 2004 and then again in 2007. We were the original grinders. Then it all came to an end pretty quick and bitterly.

But, no. Now that those stupid buttheads in the Yankees’ front office have officially declined to extend me a qualifying offer, I think I can safely come out and say that I still bleed red blood. Type B. Boston B, that is. Brian Cashman can eat my doodoo.

I’ll let you guys in on a little secret, too: As a Yankee, I might not have been able to outwardly show my solidarity by growing a beard along with some of my old buddies in Beantown like Papi and Dustin. I mean, the Yanks have some pretty tough facial hair standards. But I want you guys to know that I still grew some pretty awesome Napoli-like tufts down somewhere that the Yankees couldn’t, you know, regulate. I’m talking about nether regions right now. OK?

Yeah, what I’m probably not saying clearly is that I grew my pubic hair really long.

Anyway, I’m happy there wasn’t another round in the playoffs. My wife Tom Brady’s sister Julie was getting pretty annoyed. I was a big, hot, hairy mess watching these games. And emotionally speaking, I was a wreck too. I was throwing all kinds of stuff around our living room, just getting really intense and into the moment.

Here are my most vivid memories from the 2013 postseason run:

Smashing a serving plate into like a million pieces after Joe West screwed the Red Sox during ALCS Game 1. Anibel Sanchez was getting everything called in the first game of the ALCS, huh? I mean, I don’t care about pitch charts and FX stuff. West had it in for the Red Sox. He owes them a bunch of make-up calls next year. You just know that if I were playing in that game, I would have gotten screwed too. Some umps resent that I have such a keen eye. I would have been making my bitter beer face all over the diamond. Some of these guys just have no regard for the rules of the game. If I don’t swing at a certain pitch, it’s because it’s out of the strike zone. I don’t even need you there trying to tell me differently, dude.

Losing my voice from screaming at the TV for Shane Victorino to charge the mound after guys kept hitting him. Shane Victorino got hit by, what, like 10 pitches over the course of three rounds? At some point, someone should have told Shane you gotta run at the pitcher to reinforce your place in the food chain. Hitters don’t get any respect from umps these days. Pitchers are just teeing off on guys and the batters are always being discouraged by the commish’s office from running at these dangerous, irresponsible headhunters with bats and fists raised. I always assumed The Flyin’ Hawaiian nickname was an homage to the WWE or at least had something to do with Victorino being a good wrestler. So I was surprised he never just took off for a good old-fashioned brawl after one of those fastballs to the ribs. I gotta say, if I were on base when Victorino got nailed, I would have made a beeline for the pitcher and delivered a Brian Urlacher bone-cruncher to make sure his team knew I wasn’t messing around. Every little thing BAM! Is gonna be alright POW!

Flipping my coffee table over in sheer joy when Ortiz hit that grand slam. Oh my god, what a comeback and what a classic moment from Papi. I probably would have worked the count full to mess with the pitcher a little more, but that bullet that David hit into the Sox pen was just exhilarating to watch on TV. Maybe TOO exhilarating: My wife Tom Brady’s sister Julie had just poured herself a glass of burgundy from a pretty expensive bottle. The whole thing wound up on our white sheepskin rug when I got carried away in my sheer glee and launched the living room table up in the air. It did like a full 360-degree flip and dented the flooring. I left D.O. a message Saturday when he was at the parade asking if he’d maybe help pay for the damage. I don’t think it’s unreasonable to expect a check within the next few days. He knows my address.

Receiving a letter from the lawyers representing Fox Sports after having several choice-worded phone calls with producers. Fox’s refusal to show the pitch tracker box like TBS did during the ALCS finally had my blood boiling by the time the World Series began. Craig Breslow’s throwing error in Game 2 had me in a pretty weird place, and in the aftermath of that, I just lost my usual cool, calm, collected self in a sea of expletives that involved a few phone calls that I guess people took literally. I mean, idle threats delivered over a phone? Who takes those seriously.

Screaming like a little schoolgirl when David Ross was called out at the plate during Game 5. OK, fine. So the play didn’t cost the Red Sox the game in the end, but Ross clearly slid under, around and then over Yadier Molina’s mitt. Seemed like a black-and-white call to me. Should have been reviewed. Ross seems like a nice enough guy, but I think what might have been better is if he got up after the play and got up in the ump’s face and asked very politely for him to reconsider. I mean, just because the ball beats the runner by a couple of steps, the ump should assume the catcher will still bungle it. Catchers are oafish klutzes and us baserunner types are graceful enough to know how to get around their mitts using smoke and mirrors and voodoo and stuff.

Anyway, I’m just gonna say congratulations again to all the fans of Boston. Seems like you guys had a pretty awesome season. Now that I’m a free agent, you never know maybe I’ll wind up back in Boston. Probably a long shot, but you never know. I’m going to shop around and see what’s what.

Thanks to Boston’s success this year, I think a lot of front offices are realizing now you need some hard asses who work counts at the plate and who aren’t afraid of growing fistfuls and fistfuls of facial hair. I’ve already started growing my beard out and you guys know better than anyone from back in the day when I had my goatee, I know how to do it right. I also know how to win so I’m pretty sure there’s going to be a bit more interest in my services this year compared to last. Especially when I have an full-fledged afro growing out of my chin by December.

I don’t know, I’m just super-pumped about this offseason. This is going to be the winter of the hairy 30-something free agent who has a chock full of the intangibles. Damnit, I can’t wait.

This entry was posted in Red Sox, The Youker Files and tagged Kevin Youkilis. Bookmark the permalink.