This Week in Boston Baseballing, October 18 – 24

The Red Sox finished off the Detroit Tigers in the ALCS on Saturday night. Shane Victorino was the hero as he hit a grand slam to seal the series in six games. The 2013 World Series got off to a swimming start for the Sox at Fenway Park on Wednesday night thanks to timely hitting by Mike Napoli, a shutdown start by Jon Lester and shoddy defense from the Cardinals infield. Will Leitch probably summed it up best on Sports on Earth by saying “You half expected Jeff Suppan to pinch-run.”

It was Boston’s turn to bumblefuck away the ballgame in Game 2 last night. The key gaffe and goat status belongs to reliever Craig Breslow. Unfortunately, Sox fans will have a hard time erasing this disturbing image from their heads until around 8:07 p.m. Saturday night.

Sequentiality and the 2013 World Series
Game 2 last night came down to the “sequencing” argument that analysts have talked about quite a bit lately when explaining St. Louis’ success this season. The whole concept may seem overstated and simplistic. But last night’s game served as an important case in point that when pivotal moments occur for a given team is as important as how many pivotal moments occur.

Starters John Lackey and Michael Wacha were essentially equals in their effectiveness. Lackey gave up two extra hits but Wacha walked two extra batters while giving up two extra base hits – a double and a homer. Lackey’s only extra bagger allowed was a leadoff triple. However, while Boston’s bottom-line offensive production was arguably better than St. Louis’ overall, it was bunched into the first six innings. Red Sox hitters were shut down by the Cardinals’ fantastic tandem of young relievers, Carlos Martinez and Trevor Rosenthal. The Cards made their opportunities count – mainly by accumulating most of their success late in Lackey’s outing and, unfortunately for Breslow, immediately upon the Boston starter’s exit.

As Gordon Edes writes, St. Louis forced the issue at the perfect moment and it paid off:

Opponents stole one base in four attempts against Breslow this season; they doubled that total Thursday night when pinch-runner Pete Kozma and Jon Jay executed a double steal, even though Kozma all but telegraphed their intentions a couple of pitches earlier. They were helped when Saltalamacchia didn’t grab the ball cleanly from behind the plate.

Call it a triumph of advance scouting, the Cardinals apparently detecting something that suggested success if they tried running on Breslow.

Breslow was clearly shaken and the action likely contributed to his untimely throwing error. Boston, by contrast, was in a lesser position to capitalize on second baseman Matt Carpenter’s error in the 8th inning with Martinez bringing his A-game last night. That Ortiz’s homer came with a man on base was a stroke of good fortune. But faced with going down 2-0 heading home for Game 3, St. Louis simply created its own luck more effectively.

David Ortiz Homers in Second Straight World Series Game
Big Papi put on a perfect swing to drive a pitch on the outer half of the plate over the left-field wall. What else is there to say about this guy? 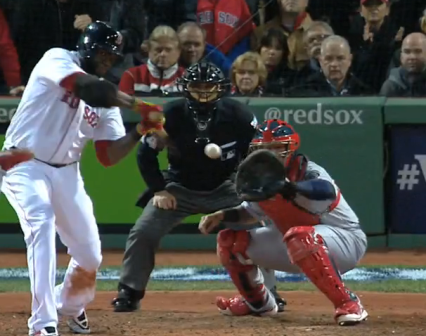 The Jonny Gomes vs. Daniel Nava Debate Continues
John Farrell cited “momentum” in explaining his decision to start Jonny Gomes in the first two games of the World Series. Gomes did little to vindicate Farrell aside from making a nice diving catch early in Game 1. Going into the series the manager’s loyalty to Gomes over Daniel Nava was already looking curious. As Dave Cameron pointed out on ESPN:

Gomes can’t even claim the hot hand advantage, as he has hit just .200/.259/.280 in the postseason, not a huge surprise considering he’s being asked to face elite right-handed pitchers, a role he’s just not made for. Gomes might be an intense personality whose energy sparks his teammates, but he can yell from the dugouts steps and inspire his teammates by encouraging them between innings.

Meanwhile, Nava likely dispelled any notion that perhaps he’s banged up by hitting a pinch-hit double Wednesday night. Unless something changes, it sounds like Nava is finally going to get his chance to start in Game 3. It would be nice to see Farrell give Nava the same leeway as he gave Gomes. But, unfortunately, it wouldn’t be a surprise if its Gomes again starting in Game 4 if Nava goes hitless on Saturday.

Clay Buchholz Gets Pushed to Game 4
With Boston clinging to hopes he can eek out one more effective start this year, the right-hander’s injury-plagued 2013 looks to be catching up with him. The Red Sox are likely to have a short leash on Buchholz Sunday night even if he shows early effectiveness. Meanwhile, St. Louis has yet to announce its starter, making Game 4 look like it has the potential to have an ugly start and turn into a dreaded “bullpen game.”

Koji Threw Three Curveballs All Season
A parting thought: FanGraphs’ Jeff Sullivan noted an interesting outlier pitch in Koji Uehara’s repertoire this season. The Sox reliever threw only three pitches all season that could be classified as curveballs.

But he hasn’t thrown it once since July. Even though, in that third time, the curve worked. Maybe Uehara came to realize a curve wouldn’t be necessary. Maybe he still didn’t trust it, recalling the first two experiences. Or maybe Uehara’s still sitting on this, just waiting to flash it again in the World Series when the stakes are at their highest. Last year, Sergio Romo froze Miguel Cabrera with an elevated fastball. Might this be the year that Uehara freezes Carlos Beltran with a two-strike curve? I wouldn’t count on that, because Uehara’s already got his weapons. But you have to wonder about this one, because you know it’s in there somewhere. Odds are that we aren’t going to see it this October. But odds also were that we weren’t going to see it this season.