The 2010 season will go down as the Year of Buchholz. Our boy Clay was able to hold his libido in check and finally harness his abilities and fulfill his immense potential as a front-line pitcher. Relatively new to married life, Clay is busy raising his three-month-old baby girl with his model wife, Lindsay Clubbine. Meanwhile, he is poised to become a perennial Cy Young contender and one of the aces of the Red Sox pitching staff for years to come. 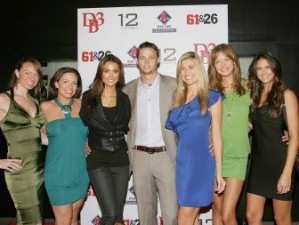 A thankful Clay Buchholz hams it up for a photo while ensconced in a cornucopia of broads.

The 26-year-old righthander recently took a few minutes out of his offseason conditioning regimen to answer loyal Fenway Pastoral readers’ questions regarding everything from romance to child rearing to Turducken.

Clay,
All those dirty diapers and drool and baby formula must really slow down your roll with the ladies, huh?

Are you kidding me, dude? I could show up in full uniform at Boston Beer Works and I still wouldn’t be accosted by as many broads as when I walk down the street nowadays. It takes me about two hours to stroll even half a block through the park near my house. The cheek pinching, the tender caresses, the goo-goo-gaa-gaa talk—these dames just DO NOT seem to ever get enough of it. And it’s twice as bad if I have my daughter with me.

Clay,
I’m 35 years old and married to who I thought was a great guy. But one of my single friends recently called my attention to a profile on Ashley Madison (the website that helps married men cheat on their wives anonymously) that looks an awful lot like it’s my husband. There is no way it is a coincidence. I’m not thinking divorce just yet, but what can I do to burn him back?

The subtle, mature thing to do is grab his credit card, hop online and buy yourself a J.D. Drew No. 7 jersey. Make sure to get the hand-stitched replica with the 2007 World Series champs patch on it. It costs like $500 bucks and it will absolutely infuriate him every time you wear it.

Clay,
Is this Turducken craze for real? The whole concept seems kind of ridiculous.

I’m with you on this one, Mary. Wake me up when someone figures out how to incorporate some real game bird: road beef.

Clay,
Does it make me less of a man if I don’t like eating the dark meat on a turkey?

Yes, Keith. Yes it does. You’re one of those people who busts out his golf umbrella the second after a couple of raindrops fall on you in the Fenway Park box seats, aren’t you?

Clay,
Some people argue that basting a turkey isn’t completely necessary. Where do you stand in this debate?

Are you serious, Troy? I’m not showing up at your house on Thanksgiving. Nobody wants to mess around with some tasteless, dried up bird. Basting is essential if you want to ensure that the turkey remains moist throughout the roasting process. After initially basting the raw bird during pre-oven prep, you have to continue applying flavor every 15 to 20 minutes so that it doesn’t dry out.

Clay,
In your opinion, how long should foreplay last?

It should take the exact same amount of time to fully explain the infield fly rule to Jade McCarthy. No more, no less.

If you’re married, you can easily fit it all in between two of Daisuke’s pitches.

Clay,
My girlfriend swears you pitch better when Jason Varitek is behind the plate than when Victor catches you. She says you look “more confident out there.” What should I do?

Break up with her and date a stripper.

That’s kid’s stuff, Joey. You might as well ask me who I like better: Derek Jeter or A-Rod. They’re both overpriced, overrated and tear through a bunch of women who look good from far but are far from good. Check out Vegas or Reno sometime…

Clay,
When “making it rain” on stage at the gentleman’s club, what is the minimum acceptable denomination for currency?

Al, you can’t make it rain with anything less than 100 individual bills, so you should make sure you can afford to withdraw that quantity from your bank account. One dollar bills are OK, but I would definitely mix in at least a few fives and tens in there if you ever plan on going back to that same establishment. Also, DO NOT pick up the cash once it’s hit the ground to try to prolong the confetti effect.

That’s all for now, everyone. Happy Thanksgiving.

This entry was posted in Red Sox, Sports and tagged Clay Buchholz. Bookmark the permalink.