The Red Sox lost three of four in New York over the weekend as the offense continues to sputter. In Chicago, Boston dropped the opener before coming back for two last at-bat wins against the White Sox, including a 14-inning affair on Wednesday night. The team has now managed just 56 runs in 16 games but still sports a 7-9 record and a fairly neutral run differential (-4) thanks to strong efforts like Jon Lester’s one-run, eight-inning performance Thursday night.

The Replay Debate
On Sunday night, the deciding run for the Yankees scored as the end result of a review that overturned a potential inning-ending double play. The galling part of the reversal was that a play that was equally – if not more conclusive on replay – was not overturned the day before because reviewers seemed to be looking at different camera feeds. A frustrated John Farrell cast his vote on the matter.

In the immediate aftermath of Boston’s loss, Red Sox Nation, with thought-leaders like Boston.com’s Eric Wilbur showing the way, hasn’t come around on the whole replay thing. 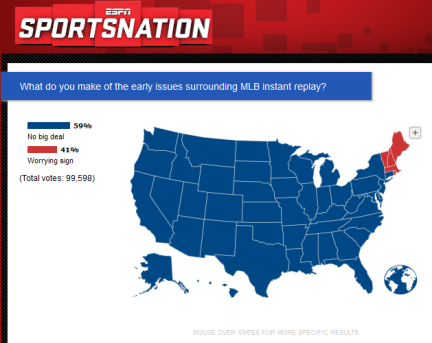 If baseball weren’t mired in the dark ages in most things technology as they pertain to on-field play, flaws in the system could have been ironed out sometime less embarrassingly late like, say, during the flip-phone era. At some point this year, replay will aid in wininng a game for the Sox and the colors on the map above will look a little different.

Twitter: Giving Media Undeserved Fodder Since 2007
Poor Xander Bogaerts. He’s deleted his Twitter account because a woman sent a sexy photo of herself to him and he accidentally posted the private message to his feed. Dude’s a 21-year-old budding baseballing star and, as is won’t to happen, ladies respond to that kind of thing.

The photo isn’t even particularly racy unless you’ve been in a coma since 1985. If so, welcome back. Also, 1984 first-round pick John Marzano never really panned out as hoped. Sorry you had to find out this way.

Red Sox Exercise Caution With Koji
Koji Uehara’s shoulder discomfort led to some extra caution for the team in New York. Uehara went back to Boston and was given a decent bill of health and rejoined the team in Chicago, picking up the save last night and reassuming his closer role. Good seeing him draped over David Ortiz’s shoulder in the duo’s signature celebratory pose.

Ortiz Coming Out of His Funk?
A lot of Boston’s offensive struggles in the early going of 2014 can be explained by David Ortiz’s sub .700 OPS. Papi is the lynchpin of the offense and two homers in 16 games is concerning. Chicago’s Adam Eaton took away a solid bid for a third last night. It may just be a matter of time…