News of David Ortiz’s contract extension is drawing a variety of viewpoints from People With Opinions regarding whether the proverbial “hometown discount” has played a role in Papi’s compensation. It’s a pretty amusing argument given that Ortiz has never been paid more than $14 million in a given season. On the other hand, he’s been paid about $125 million up to this point, counting 2014. The basis for any kind of discount debate basically comes down to the intellectual dishonesty of either ignoring how little Ortiz was paid as he was proving himself to be a superstar or ignoring the cumulative amount of money he’s earned because he has been successful in Boston.

Looking at his annual WAR and corresponding salaries, Big Papi was basically grossly underpaid during his peak seasons and then essentially paid aptly during his declining years. On an extracurricular level, Ortiz has also obviously cashed in on his local hero status (as he should).

Since Ortiz first became a Red Sox in 2003, the price per one WAR has gone from around $3.0 million, based on FanGraphs.com estimates, to close to $6.0 million per WAR this year (based on expected production versus the money doled out for free agents who signed during the 2013-2014 winter).

One of these years, given his age, Ortiz is likely to fall apart, whether it’s gradually – due to decreased bat speed – or more abruptly as a result of an injury. Or, Ortiz could still be on the team in 2016 and 2017, based on the extension announced today. There are vesting club/incentive options for 2016 and another club option for 2017. Both of which are based on plate appearances and could very well lead to some discomfort if Ortiz enters into a prolonged funk at the plate and begins losing ABs as a DH.

There are therefore a number of possibilities for scaling up Ortiz’s salaries based on his performance. We can assume the team has at least in theory allocated $16 million for each of the next three seasons, 2015-2017, in the event he continues to defy the odds. It’s hard to imagine Ortiz hitting all escalators, but since the deal has been done in part to appeal to his pride, you have to figure there is at least a non-zero chance that he earns $16 million in 2017 if he, say, hits 30 home runs at age 40 during the 2016 season. If all that were to happen, here would be the breakdown of his time with the team. 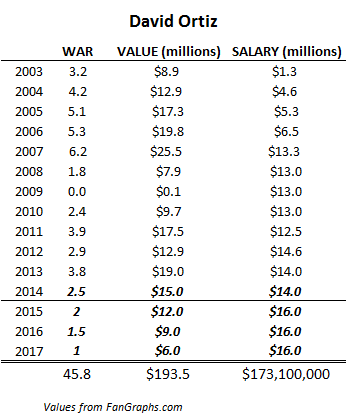 As shown in the chart above, if we look forward to the next three seasons for Ortiz, using his projected 2014 WAR of 2.5 as a baseline and assuming he loses about 0.5 WAR of productivity each season, Big Papi can be expected to ultimately net around $173 million in salary over the course of his Red Sox career while producing about 46 WAR overall in a Boston uniform. That works out to a payout of around $3.8 million per WAR.

Based on that production, the Red Sox will have gotten $20 million in surplus value thanks to his output in peak years.

Meanwhile, all of this could be instructive when trying to figure out what Jon Lester’s “hometown discount” extension, which seems to be an inevitability, may look like. With Ortiz more or less guaranteed to end his career with the Red Sox, it looks as though the team has established something of a baseline for what it will pay to keep a fan favorite around longer than it perhaps would normally stomach.

Projection systems have Lester pegged around 3.5 to 4.0 WAR this season. We’ve taken the higher end forecast for the purposes here and stepped it forward five years. Lester’s decline isn’t likely to be very linear. But assuming on average the same 0.5 decline annually, he’s a decent bet to generate 12.5 WAR in total over five years. This seems reasonable given his age and that he’s a lefty. (Maybe he starts being a “crafty” southpaw and stuff.)

If the Sox and Lester agreed to a five-year, $125 million extension, he would wind up with the exact same cumulative WAR as Ortiz over essentially the same amount of time (14-15 years) and right around the same total compensation ($169 million for Lester versus $173 million for Ortiz). 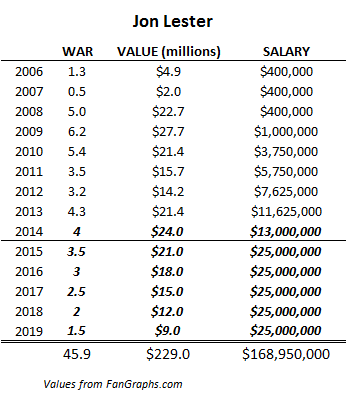 Five years and $125 million seems like way more than the Red Sox would be willing to give any pitcher given their past track record. John Lackey hasn’t been quite the disaster many want to believe after all, but the team hasn’t come close to revisiting a five-year deal approaching nine figures since. Then again, if Lester doesn’t sign now and pitches well during 2014, he may be a goner given that Max Scherzer supposedly turned down six years and $144 million (as ESPN’s Gordon Edes noted in the article linked above).

To bring this back full circle, one can argue pretty easily that something like a five-year, $100 million deal would indeed represent a substantial “hometown discount” on Lester’s part. After all, he has – albeit more quietly and often with a scowl – done nearly as much for the Red Sox as Ortiz.

Meanwhile, since Lester began his career with Boston and was paid minimum salaries while under the club’s exclusive control, it’s conceivable that he could end up generating about $50-60 million in surplus value, even if he does get that $125 million deal as modeled above. Lester has never even come close to being paid more than the WAR value he’s generated. The team has benefited more from Lester than Ortiz on a cost-of-production basis because he was developed internally and was extended at a team-friendly deal near the end of his rookie contract.

It’s just business as usual for a front office that is proving to be adept at valuing its assets and making shrewd business decisions. The Red Sox aren’t going to be getting any hometown discounts from Ortiz or Lester because they’ve already gotten them. And it’s unlikely either player feels obligated to extend a discount, regardless of what they may tell the media when the question inevitably comes up, in one form or another. Unfortunately, that’s not the type of narrative that warms the heart or generates a whole hell of a lot of page hits and drive-time callers.

This entry was posted in Red Sox and tagged David Ortiz, Jon Lester. Bookmark the permalink.