The Youker Files: Packing up for a year in Japan

As a child of the early 90s, I’ve seen the movie Mr. Baseball about a thousand times thanks to TNT and TBS. In the film, a former major league superstar played by Tom Selleck is traded from the New York Yankees to the Chunichi Dragons when his career in the U.S. goes south. Selleck’s character struggles to fit in on his new team.

But then some weird stuff happens. He falls in love with one of the locals, wins over the fan base, starts to figure out the culture and, at the climax of the movie, hits home runs in seven straight games in really dramatic fashion. He marries the girl, returns triumphantly to the U.S. and winds up becoming the manager of the Detroit Tigers. I won’t rehash any more details in case some of the younger readers haven’t seen the film yet.

So anyway, the parallels here are eerie, right? Only a few minor details are different. I myself just finished up a less-than-stellar year with the Yankees. And I’ll be playing for the Tohoku Rakuten Golden Eagles, not for Chunichi. But otherwise – the killer mustache? the Hollywood pedigree? the rugged American sex symbol in a classic fish-out-of-water scenario? the hairy forearms? I’m blushing here, but yeah, I am like the real life Mr. Baseball or whatever.

Back when I went over to Tokyo in March 2008 with the Red Sox to play the Athletics to start the season, I didn’t have a lot of time to really assimilate into the culture or anything. It was just too much of a whirlwind. But if we had been there for a few more days, though, the vibe I got was that I was on the verge of total acceptance. I mean, no offense to Red Sox Nation here, but Japanese fans coordinate their chants in perfect synchronicity. It’s amazing. So I really think these Golden Eagles fans are going to nail the “Yooouuuk” thing pretty early on.

Plus, check out this picture the Associate Press got of me trying to follow along with a pregame Awaodoi dance routine put on by some of the native dancers. I think I held my own pretty well. 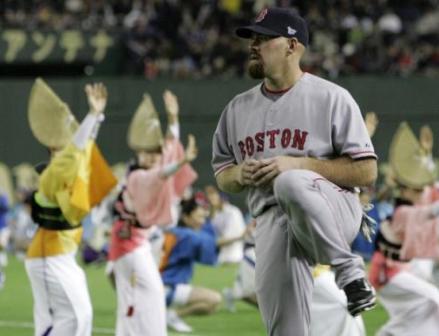 On top of that, just check out this article in The Japan Times about how Japanese baseball fans love the artistic genius of unconventional batting stances. In fact, the writer says I am the Michelangelo of batting stances. Yeah, I definitely feel the same way and he was my favorite Teenage Mutant Ninja Turtle as well so there is just a lot of Zen-like harmony and symmetry in this world.

There are other reasons I had to do this deal with Tohoku you guys. I get a $4 million base salary and I can get another million more if I hit some basic benchmarks. And this is where I really took them for a ride: Part of how they calculate the incentives is how many walks I draw. I mean, c’mon! They would have been calling me The Wolf of Yawkey Way or something if MLB teams had stuff like that written into their contracts five or six years ago.

Some people have been asking about how I’ll assimilate into the culture. (Tom Selleck didn’t really get it at first because he was being an idiot.) But I think I’ll do just fine. I’m taking my wife, Tom Brady’s sister Julie, and my kids. Plus, I’ve done pretty well for myself in yoga class even after the embarrassment of that first session, when I accidentally ripped a fart in the middle of one of the poses. A lot of people sent me heartfelt messages after that incident and told me to just keep my head up and forge ahead. Turns out that farting isn’t all that uncommon during yoga and I never had to feel as ashamed as I did. I kinda figured that, but it was still nice to hear people come out of the woodwork and say it.

It’s not going to be all baseball over there either. I’ve got some things I wouldn’t mind doing while I’m over there. If they’re still around, it would be cool to meet the guys who made the 8-bit Nintendo video game Contra. I was so good at that game back when I was 11 or 12 years old that I didn’t even need to use the cheat code for unlimited lives. I’m pretty sure there are only a handful of us around so maybe the developers of that game would appreciate meeting me?

So I guess it’s off to the Far East. I’m not sure why they can’t just call it the Near West if you fly to Japan from California or really anywhere on the West Coast, but whatever. I’m not in the mood to fight every little battle. For example, the sushi thing. Yeah, that’ll probably come up a fair amount. I don’t eat raw fish and people will just have to deal with that.

I know that some of you guys out there kind of floated the idea of me coming back to the Sox before the team re-signed Napoli. Yeah, I would have probably crushed it at first base and as a DH spelling David Ortiz, but I think it was some Zen Buddhist or other Asian philosopher who first coined the phrase “Everything happens for a reason.”

If you really think about it, that’s pretty insightful. It’s definitely a little more useful than other motivational sayings I’ve heard like Millar’s “Cowboy Up” thing. Then again, Kevin Millar wouldn’t understand a good koan if you etched it on a baseball and drilled it into his ribs. I suppose that’s my way of saying the Red Sox will be alright without me. And, hey, if the Red Sox end up signing Masahiro Tanaka away from my new team, it’ll be kind of an even trade right? Funny how these things work out in the end.

And, look, at the very least my new career in Japan can’t possibly be any weirder than Manny going over to Taiwan last year, right?

This entry was posted in Red Sox, The Youker Files and tagged Kevin Youkilis, Mr. Baseball. Bookmark the permalink.