Last month, Red Sox CEO Larry Lucchino publicly acknowledged that the Red Sox are experiencing a lull in popularity for a variety of reasons. Competitive cyclicality, roster turnover, and market saturation, to name a few.

But another explanation for the decline in demand for ticket sales for Fenway Park in 2013 is the team’s surprisingly arrogant attitude toward the true value of live baseball, which is as fluid a commodity as a block of gold, a gallon of gasoline or corn futures. The Boston Globe recently tackled the organization’s seeming indifference toward fleeing season ticket-holders who have declined to renew their accounts for 2013.

Meanwhile, the club has become equally as complacent in its handling of patrons interested in purchasing single game ticket purchases.

The team’s Double Play Pax promotion is a good case in point. On the surface, the Double Play Pax idea seems to be a smart attempt to convince Red Sox fans to purchase seats for less popular games (see the box below, right) by offering a crack at tickets to more desirable games (mainly, the rights to buy Sox-Yankees tickets). In exchange for their purchases of early season duds, fans double-down on a marquee game (as defined by the club in the list below, left).

Now, here is the catch: There is no actual price reduction offered. 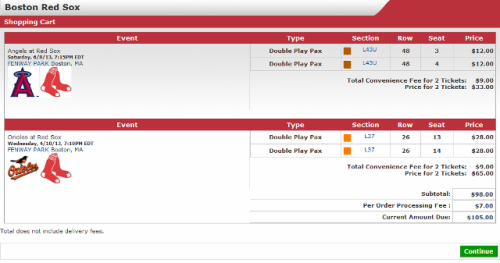 Not visible in the screen grab above: “You, loyal Red Sox fan, are welcome to pay full price for these seats in Row 48 (Dunkin’ Dugout territory!) of the bleachers for a blue-chip match-up against Mike Trout’s Anaheim Angels. In exchange, here’s two more bleacher seats that are only 26 rows from the field – and more than twice the price – for a game that we have already identified quite publicly as a far cry from Pedro vs. Clemens circa 1999.”

Rather than addressing dwindling demand for less popular games by creating a tiered ticket pricing system as many professional teams do, or creating some free giveaways*, the Red Sox have decided to manipulate fans’ perception of present demand.

*Via a FanGraphs correspondent Zac Hinz, 27 MLB teams have a total of over 600 gameday promotions planned for the 2013 season, including bobbleheads, posters, photos, magnetic schedules, etc. The Red Sox have none. Maybe it’s just us, but giving the first 10,000 fans some cheap trinket is a time-honored baseball tradition and, if nothing else, it probably feels a little less sleazy than a team drumming up ticket sales by preying upon the stupidity and reluctance of the general public to sit down and do some simple math.

The team is in essence telling people already wary of purchasing tickets for one, solitary Red Sox game that the opportunity cost of buying tickets for an additional game ought to provide the ample rationale to hand over the additional money.

It is akin to infamous ploys by cable providers such as Comcast and Verizon in which subscribers are bullied into paying extra money for “bundle” packages that include unwanted add-ons like landline telephones simply because it is the only way to get HBO or Showtime at any price that might approach reasonable. Or, if you’re 85 years old, it is akin to robbing Peter of $20, hitting Paul in the face with a sock filled with 1,000 pennies and then giving Mary and Joseph upper bleacher seats for a late April game that starts at 6:30 p.m. against the AAAA-caliber Houston Astros.

So while the much-maligned, much-publicized sellout “streak” will almost certainly come to its merciful end sometime during the 2013 season, the team’s sales strategy this winter ought to absorb as much of the blame as any of the less tangible factors being tossed out there anecdotally, such as local fatigue for baseball; misguided talk of a “bridge year;” or the exaggerated wake of destruction left behind by Bobby Valentine.

This entry was posted in Red Sox and tagged Boston Red Sox. Bookmark the permalink.