The Boston Red Sox may be the latest beneficiaries of the maxim, No good deed goes unrewarded.

What began as a cute marketing ploy to keep the team’s ongoing charitable work in the headlines during Fenway Park’s 100th Anniversary season may become something a bit more substantial, per approval of the MLB commissioner’s office. 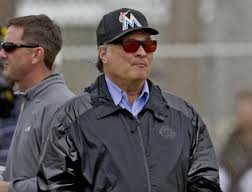 Since it’s probably too late for baseball in Miami to be outright cancelled in 2012, tt may not be a bad idea for Jeffrey Loria’s Marlins to extend the scope of its community outreach programs during the upcoming winter (Miami Herald photo).

Top men say the Boston Red Sox are close to acquiring superstar outfielder Giancarlo Stanton from the Miami Marlins in exchange for what was slated to be Boston’s 94th Act of Kindness of the 2012 calendar year – a commodity that could be  of immeasurable value to a team looking to put a rather large band-aid over its public image.

Analysts say Marlins owner Jeffrey Loria could most definitely benefit from a very public 94th (or, for that matter, 1st) “Act of Kindness” to help restore his good name locally, particularly amongst taxpayers who helped finance construction of a stadium which will serve as the home for underpaid, obscure big-league talent for the foreseeable future.

According to the the latest release on RedSox.com, the 100 Acts were created by the Yawkey Way braintrust to “highlight and support the important work done by the many charitable institutions throughout New England and beyond.” The Acts have included a variety of donations, charitable events, community outreach efforts, Pinewood Derby races and Bingo nights.

Suddenly, the whole “New England and beyond” throw-in is looming large in light of the controversy brewing in Miami.

The embattled Loria is being called out within all corners of baseball media as a phony, money-grubbing scumbag con man cheating jerkface after trading away almost all of the team’s most popular players Tuesday night.

“Jeffrey obviously needs to do something huge here to help restore some credibility and respect to the Miami Marlins franchise,” said one source within the organization.

Since the Red Sox only recently identified the 77th through 81st Acts of Kindness last week, there are myriad possibilities for the 94th Act being sent from Boston to Miami.

“We understand taxpayers in the Miami-Dade county area and beyond are angry over the team’s decision to seemingly mail in its competitive chances for the foreseeable future and beyond. However, while we are losing guys like Josh Johnson, Jose Reyes, Mark Buehrle and, potentially, Giancarlo Stanton, this 94th Act of Kindness from Boston will be something special. Really, this Act could range from anything from a freeze on ticket prices for 2013 to a donation of unsold XXL T-shirts with the new Marlins logo to a local rest home. We haven’t ruled out a Livan Hernandez bobble-head night if supplier pricing is reasonable.”

For what it is worth, the 94th Act of Kindness was ranked by Baseball America as Boston’s ninth-best prospective PR boon at the beginning of 2012.

At the same time, analysts around the league are applauding Boston’s shrewdness.

“Let’s face it,” said one expert. “That ‘No. 94’ doesn’t have a great connotation attached to it in baseball since a lot of fans will probably associate it with the player’s strike of 1994.”

Insiders say Boston balked at sending Miami Act No. 100 since it is a round number and “has a pretty nice ring to it.” The Marlins eventually acquiesced and the two clubs remain confident they can iron out any lingering roadblocks before the weekend.

In related news, Red Sox CEO Larry Lucchino announced today that Act of Kindness No. 82 will be 10% off all licensed “Stanton” Red Sox jersey purchases that may become available during the month of December through the RedSox.com team store.