The Youker Files: 10 Tips for a Successful Job Interview

After a dramatic, heartfelt goodbye to Boston, free agent and former Red Sox 1B/3B, Kevin Youkilis returns to Fenway Pastoral for the first time to talk about the free agency courting process. 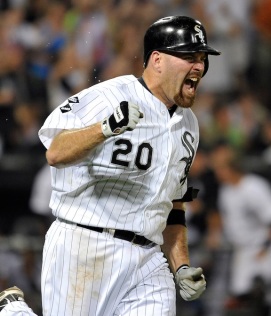 What’s up everybody. I’m writing this from the gate of an airport terminal while waiting for my flight to leave Chicago. Or is it Cincinnati? Or is it Milwaukee or Cleveland?

Sorry, guys. My agent won’t let me say where I am right now where because he says it could compromise my “market leverage.”

Whatever the hell that means. This free agency stuff is pretty strange. This is the first time in my career that it will be up to me to decide where I get to play next season.

Everybody has their ass all a-pucker over the fact that I’m 33 years old. Like I’m some kind of ancient artifact or a dinosaur or a wrinkly, white-haired wizard. I mean, seriously. I don’t even have hair on the top of my head right now but I could grow it out and be in shampoo ads like Tim Lincecum if I felt like it.

Obviously, last year was a down year for yours truly. But I’m not nearly done smashing baseballs. Some people are going to find that out the hard way next year. Pitchers mostly. And the manager, players and fans of opposing teams, too, I guess.

But first thing’s first. (Or third, too. I can still play third base too, you guys.)

I’ve got to prove to these general managers and front office dudes that I’m totally worth a 3-year, $60 million contract. That’s only $20 million a year, which is fair if you’re getting a guy who will mash 40 home runs and be a clubhouse leader like me. Yeah, sure: the player’s union won’t let me specifically promise any of those things in an actual contract. But I mean, what are the actual chances that some weird, freak injury keeps me from fulfilling that unwritten pledge?

Anyway, I’ve already learned a lot about how to present yourself properly when meeting with a potential employer.

Here’s what they don’t tell you on Monster.com:

1. Brand yourself a winner right off the bat. When I shake hands with the executives of an interested team, I want to make sure to jog their memories of my two World Series wins in 2004 and 2007 with the Red Sox. So I wear one WS ring on each of my hands. As I’m introducing myself, I squeeze their hands extra tight and bring my left hand in for one of those extracurricular back-of-the-hand pats that you mostly only do if you’re in Europe or if you’re in the mob. Here’s the wrinkle, though: Hold that position for a 15-second count, glance down at the rings and say, “How’d you like one of these to have a (fill in the appropriate team name here) logo on it??”

2. Make eye contact. As you’re gripping and patting hands, lock your eyes in on the other person’s irises. And don’t be the first to look away. Back in elementary school, I was king of staring contests during lunch. So I’m pretty sure I’ve been nailing this one the last couple weeks.

3. Carve out time for a preemie just before your interview. Selling yourself to a potential employer is nerve-wracking. When I get nervous, I can feel things swirling around in my stomach. The less things you have swirling around in your stomach, the less the chances are that you’ll have to rush out of the office in the middle of the interview to relieve your bowels. Scout out suitable restroom venues in advance. You don’t want to wind up crushing out your preemie in the bathroom stall next to the general manager you’re about to shake hands with five minutes later. Take it from me: It gets weird.

4. Wear a subtle amount of protective gear (elbow pads, shin pads, etc.) over your suit. Even if you’re a guy who doesn’t have durability concerns, this tells the interviewer that you’re pretty damn serious about staying at an optimal level of health. As an added bonus, you’re pretty much all set to take some hacks in the batting cage if there are any skeptics questioning your bat speed, hitting eye, etc. Also wear a tie.

5. Make your ‘weaknesses’ sound like attributes. “Well, sir, I’ll admit to you right now sometimes I swing at bad pitches…and they usually wind up going 400 feet instead of 420 feet…”

6. Blame embarrassing photos of you on the Internet on advancements in technology. Seriously, I’m sick of all these nerds circulating “photo-shopped” pictures of me flipping the bird.

8. Don’t get visibly annoyed if they take a few minutes to find and hook up a VCR so you can show them your highlight tape. One of my high school buddies from home in Cincy cut me a tape back in the 1990s. I dug it out after the White Sox bought out my contract and I officially became a free agent. It’s important to show the big-wigs that you have extensive, prolonged experience in whatever industry you happen to work within.

9. Demand to know when they’re going to make a decision. If they waffle, pull out your cell phone and put it to your ear like you’re answering an important call from your agent. Make a bunch of contemplative faces and say cryptic things like, “Wow, that’s a generous offer!”, “Geez, I guess I have a lot to think about now…” and “Adam LaRoche just signed a contract for HOW much??”

10. Wait until you’re being walked out to offer autographs for their wives and kids. This is just simple, common sense stuff. But it’s still worth remembering.

Alright, guys. My flight is about to start boarding. I need to get on the plane ASAP. I want to ask the pilot before he heads to the cockpit not to mention that I’m on the flight. I don’t want to stir up speculation I might be signing a deal before we even get to Thanksgiving. I want to savor this process in case I end up signing a five or 10-year deal that takes me into retirement.

Who knows? Maybe it’ll be back in Boston. Weirder things have happened. (To me, at least…)

This entry was posted in Red Sox and tagged Kevin Youkilis. Bookmark the permalink.