The Youker Files: Hanging ‘Em Up for Good

Gosh, this is a lot more emotional than I thought it would be. I feel almost sick to my stomach. Disgusted.

I’ve torn the velcro from my hulkish, oversized elbow guard for the last time. Thrown my helmet in utter disgust across a crowded dugout full of people for the last time. Ripped open my last bag of sunflower seeds. Defaced my last dugout lineup card that doesn’t have me hitting cleanup with crudely drawn dicks and middle fingers. Spat out my last juicy mouthful of chaw.

Well, OK. In the major leagues, that is…I’m still lifting and doing bench presses and stuff so that I can join one of those small town over-40 softball leagues and show everybody what a home run really looks like; yeah, I know I’m not 40 years old yet but close enough and last I checked some rinky dink town ain’t gonna be asking for a birth certificate or a printout of my baseball ref page.

I’m sure a lot of reporters are going to be calling me about my thoughts on potentially one day being inducted into the Red Sox Hall of Fame. I’m not the one to make the decision but it’s probably the right thing to do since most of the fanbase really started to appreciate the art of drawing walks for the first time because of me. I was the first third baseman who made getting on base “cool” in this town. I doubt most Bostonians would disagree.

Some may point to my relatively quick fall from grace as evidence of the cruel realities of baseball’s aging curve. But what I think most people may not know is that I was basically a man-child at a young age. Not trying to brag here. But; I gotta say it: I was really mature as a youngster and well sorry if it makes you guys a bit uncomfortable but puberty rolled through me early and by the time I was in junior high, I was just dominating these noodly armed prepubescent pitchers I went up against in local baseball leagues. Those years count in my book, and I remember them well and fondly. Wouldn’t trade them for anything.

Point is, yeah, I only hit 150 homers in the big leagues, but if you add on all those dingers from my Babe Ruth and high school years? I’ve gotta think I’m well over 500. Conservatively. Ask anybody who was paying attention to the metropolitan Cincinnati youth baseball space back in the mid-1990s. I was something to be reckoned with.

A lot of my fans have been asking me why I didn’t continue my quest to go for 500 dongs as a professional the old-fashioned way – as a late-career refugee over in Japan. Rest assured, I would have probably done that if I chose to stay over there long enough, but the whole culture in Rakuten is different from the U.S. They weren’t bowing down to me or asking for pointers on how to glide your right hand up and down the handle of the bat as a timing mechanism the way I assumed they would. They really just seemed to view me as a novelty of sorts and I didn’t like it. I felt cheap and used.

Honestly, it felt like I came from some other area of the world or something. I tried to relate, I really did. Thought I was starting to endear myself. When I told people I was married to Tom Brady’s sister and that I did yoga, they rolled their eyes and exchanged knowing glances with each other. Humiliating. Worse, when I didn’t immediately put up the numbers I did back when I was a teenager full of piss and vinegar, they turned their backs on me like an old, damaged dog from the junkyard doghound outhouse. It sucked.

So anyway, the question now is what the hell am I going to do with myself with all this free time? Well, I’m sure MLB Network and Fox Sports and all those TV channels are going to come calling. I’ll weigh those offers pretty earnestly but I’ve always believed once you start appearing in movies (Milk Money, Oscar-nominated Moneyball, Oscar-snubbed piece of  cinéma vérité Cowboy Up: The Story of the 2003 Boston Red Sox), you can’t go back to TV. It’s just not a viable career move. I think, though, a cameo here or there in which I come out on stage and put Gabe Kapler in a headlock might not completely obliterate my rep or anything like that.

As you probably guessed, I’ve also got a few book ideas in the pipeline. Tell-alls, autobiogs, retrospectives, science fiction spaceship adventure dramas. A chilling recount of love bitterly deferred, based on a true story from one fateful night that ended in the parking lot of a Little Caesar’s during a road trip when I was in the minor leagues.

Apps? Yup, got a few logs burning on the fire of that front as well. A WWKYD thingy; a tell-all retrospective science fiction spaceship adventure drama game. An Apple iPhone Maps program that tells you where the nearest Little Caesar’s is. Things like that.

Lawsuits: Sadly, yes, I’m working on a few of those. Chiefly, this article published online by The Onion in 2012, “Kevin Youkilis Takes Out Full-Page Ad in ‘Juggs’ to Thank All the Trim in Boston.” Yeah, I don’t really know where the hell that came from, but it’s completely false and made up. I keep having to tell people, including my wife, that I’ve never even seen the magazine Juggs. Don’t know what it’s even all about. So in light of those facts, tell me how the heck would I have come to pay for an ad in a magazine devoted to large-breasted women (I’m guessing that’s what it is…sounds pretty suggestive doesn’t it?).

I’ve also decided to officially go after Terry Francona for defamation. As I’ve told you guys before, I was none too pleased when he decided to tell reporters I have a small penis. Supposedly he was just joking, but sometimes it seems like that’s all anybody who I come across on a busy city street seems to want to remember. It’s very embarrassing (also not true you guys my penis is a normal length and hopefully I don’t have to prove myself in front of an entire court of law or anything but if that’s what it comes down to so be it).

Lastly, I’m most definitely going after Rick Porcello because he tried to hold me down and kiss my mouth after throwing at me during an at-bat back in 2009. I think if he just publicly apologizes and acknowledges that was a pretty weird thing to do in the middle of a brawl, maybe I’ll let that one slide. I don’t want to be one of those litigious types.

But anyway. A lot of people say that when one door closes, it slams into your bare foot and you stub your toe really hard and it hurts like nothing else in the world and you hop around in sheer agony. But, once it’s over, there’s another door that opens up in its place and, even though you’re fairly sure you’ll somehow stub that same throbbing toe again going through it, that door represents opportunity. And obviously (once your toe feels better) you walk on through it.

What I’m trying to say is I’ve gotta stop wasting my life drawing 10-pitch walks and grinding down pitchers, working up pitch counts. Fighting off pitch after pitch after pitch. Laying off any and every pitch that may look enticing but is, in fact, out of the strike zone. Making bitter beer faces at umps when they call a strike on some borderline pitch and not so successfully holding in farts when I step out of the batter’s box during particularly long ABs. At the end of it all, I can’t keep taking those high and tight pitches that end up running up on the ribs or off armpit…all in the name of furthering the win probability of some baseball team.

As iconic hero Walter White said in Breaking Bad, ‘I’ve still got things left to do.‘ With that, I’m hanging ‘em up. And, well, nobody better get in my way… 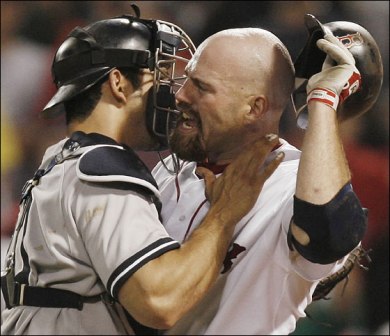 This entry was posted in Red Sox and tagged Kevin Youkilis. Bookmark the permalink.