The Red Sox’s opening weekend at Fenway Park didn’t go so grand as the Brewers earned the first sweep for a road team in Boston since the Bobby Valentine regime. Boston took two of three against the Rangers thanks to David Ortiz’s heroics on Wednesday afternoon before losing 4-1 last night at in New York in Game 1 of 19 against the Yankees. Boston was 13-6 against the Yankees last season.

Michael Pineda Wasn’t In the Mood to Hide the Pine Tar
The Yankees righthander outdueled Clay Buchholz and rightly deserved to win as Boston’s offense was back to its mostly anemic ways Thursday night. However, all anyone will remember was that Pineda apparently submerged his hand in pine tar before spinning the gem.

The Internet and social media was all over it once NESN caught on in the third inning. A summary of images archived by Google in the last 24 hours for a search of “Michael Pineda”: 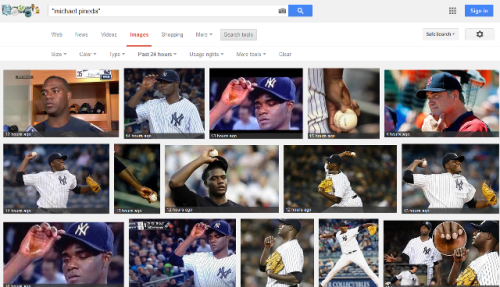 In the Herald, John Tomase wrote:

Publicly, most Red Sox hitters either feigned ignorance or said it had no impact on the game.

“Everybody uses pine tar in the league, it’s not a big deal,” slugger David Ortiz said. “What else?”

But privately, multiple players believed he crossed a line — one, for the sheer brazenness of apparently applying the substance with a trowel; and two, for throwing a slider they considered filthier during the first four innings than the final two, when he mysteriously cleaned up.

Oh John Tomase…you and your private conversations with unnamed sources.

JBJ Changes the Conversation In His Favor
Timely hitting and some smooth plays in the field has helped remind people that Jackie Bradley Jr. isn’t chopped liver. He would have begun the season in Pawtucket if not for Shane Victorino’s injury, but he is proving to be all-around solid so far, leaving his struggles in spring training behind. He has options left and isn’t likely to stay up the whole season, but the outfield minus JBJ’s glove is considerably worse.

Yeah, Just Swing Away A.J…
Leaving aside the inexplicable dislike that A.J. Pierzynski seems to stir up in most everybody, the guy is an odd fit for the Red Sox. Clearly, he is just bridge to Boston’s tandem of young prospects, Blake Swihart and Christian Vazquez. Boston can’t just play the 38-year-old David Ross every night. So we’re left with A.J. Fucking Pierzynski, who separates himself from Boston’s organization-wide philosophy of plate discipline by swinging at goddamn everything.

I’d be remiss if I didn’t point out his second-inning double-play came on a ball he went reaching for across the plate. He strikes me as the kind of guy who, even hitting .300, is going to drive me crazy. (Please note, he’s not going to hit .300.) But yes, it was the only time he was retired in the game. And he had a great Sox-style nine-pitch at-bat in the seventh that ended with an infield single.

Fan Attendance At Fenway Park
The Red Sox are having a hard time getting another “sellout streak” up and running in the early going of 2014. The ballpark was 99.1% full for Opening Day last Friday based on ESPN’s definition of “full capacity.” The team hasn’t come any closer to a full-fledged sellout since. Fenway drew a little over 33,000 fans for the 4:05 p.m. start against Texas on Wednesday. Overall, the park has been about 90-95% full at best at the start of each game.

Fans are leaving early in droves, which isn’t all that remarkable considering the weather has been crisp for just about every game so far. Still, there is a clear reason the team has begun deploying profit-generating measures such as dynamic/variable ticket pricing and, for the first time in years, holding various minor league-style kitschy promotions like Toga Night.

This entry was posted in Red Sox and tagged Mich. Bookmark the permalink.