Ballots for Baseball Bloggers Alliance (BBA) awards are due prior to the first pitch of the World Series tomorrow night at Fenway Park. Fulfilling our duty as part of the BBA, here are Fenway Pastoral’s picks for 2013 American League awards.

AL Manager of the Year (Connie Mack Award) – John Farrell
The decision came down to a couple of first-year managers–Terry Francona and John Farrell. It’s been two years since Francona’s exit from Boston and the subsequent smear campaign that some front office members inexplicably deemed to be somehow necessary. It is worth noting that Tito is the most accomplished manager in Red Sox team history. And somehow his success in Cleveland this year may have been his best managing job yet, once the talent level and payroll he was working with in Boston is taken into consideration. Francona deserves all the accolades that comes his way.

If ballots for this award were due prior to the start of the playoffs, Tito would have been the clear-cut selection. By late September, Farrell had already been getting more than his fair share of credit for the job he did turning the Red Sox around from worst to first in the AL East. But postseason games dictate that managers employ their highest level of intelligence and in-game strategy. Unfortunately for Tito, his playoff run ended after a loss in the one-game Wild Card play-in. So far, Farrell has had 10 games over the ALDS and ALCS to show his true skill. And that’s where he wins out. He has been close to unassailable in his deft bullpen usage, lineup changes (i.e. Bogaerts better late than never) and other various play-calls. He is working with a ton of talent on his roster – more than Francona – but in terms of the sheer act of “managing,” what Farrell has shown this October is just too impressive to overlook. 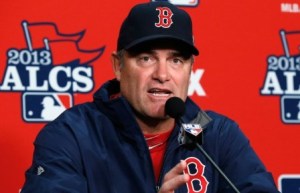 AL Top Reliever (Goose Gossage Award) – Koji Uehara
Uehara has had one of the best seasons for a relief pitcher in the history of the game. Koji just did not have many peers in other AL bullpens heading into October. After taking over the reigns as closer, Koji took his dominance to a new level. By September, every time Uehara threw the first pitch of a given appearance that the umpire called a ball, there was a feeling of deflation distantly akin to those Pedro Martinez starts after he gave up the first hit of the game. With that out of the way, since we considered October performance in the manager voting, we did the same here. Even if the home run Uehara allowed to Jose Lobaton in Tampa had ultimately helped to cost Boston the ALDS and he never had the opportunity to win ALCS MVP honors, his regular season resume was way too commanding to lose this “crown.”

AL Top Rookie (Willie Mays Award) – Wil Myers
As Red Sox supporters, it’s important for us to note that it wasn’t exactly Fred Lynn in ‘75 or anything…but the Rays outfielder had a pretty solid rookie season.

AL Top Pitcher (Walter Johnson Award) – Max Scherzer
There wasn’t a ton of difference between Felix Hernandez, Anibel Sanchez and Max Scherzer aside from the number of Wins accumulated. Whether you prefer to lean on FIP or noisier statistics like ERA, the case for Sanchez is very strong. Meanwhile, both Sanchez and Scherzer were nearly unhittable during their first starts against Boston in the ALCS before looking significantly less dominant the second time around. We settled on Scherzer based on the 30-plus extra innings he threw during the regular season and the fact that his bullpen made his postseason stats look a lot worse than the reality.

AL Top Player (Stan Musial Award) – Mike Trout
God bless the BBA for its simple terminology here. Nobody is going to parse the definition of “top” as a modifying adjective, right?