Out Of Rightfield: Some Season Ticketholders Feeling Betrayed By 2011 Renovation Plans

As a season ticket-holder of box seats in the right-field corner,  Thomas Morrissey has not actually seen a pitch reach home plate during a game at Fenway Park in 12 years. Not that he could have ever cared any less.

Since 1999, Morrissey has made the long trek from his home in North Attleboro to Friendly Fenway for every home game. From the slightly elevated vantage point offered by his two seats in the right-field loge box just in front of grandstand Section 5, Morrissey proudly boasted to friends about his unrivaled view of the spacious patch of grassy real estate dutifully manned in recent years by the likes of Trot Nixon, J.D. Drew and Eric Hinske.

And, while beauty can sometimes be exclusive to the eye of the beholder, absolutely no one had a better view of the visiting team’s bullpen catcher.

“You can see the catchers giving practice signs to the pitchers and trying out new mitts, breaking them in,” Morrissey gushes. “Double-barreled action is the best. Just a barrage of 80 mile-per-hour warm-up pitches. Pop, pop, pop, pop. Back and forth. Sometimes in perfect unison.” 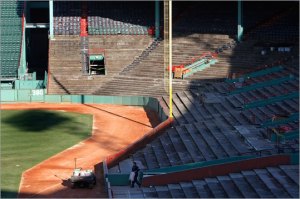 The glory days for Morrissey appear to have come to an abrupt, ever-so-cruel end. As recent photos on the Boston Globe website confirm, the Red Sox have torn up the lower seating bowl housing the right-field boxes and plan to re-pour the cement footing later this year before replacing the north-facing seats with chairs that will presumably* be angled to the west (i.e. oriented toward home plate).

*Fenway Pastoral is not currently owned by the same corporation as the Boston Red Sox and, thus, team officials declined (rudely) to provide final blueprints of the construction plan.

Adding insult to injury, the organization also has plans to install several high-definition video screens above the outfield bleachers.

“A lot of good that does me now that my seats will be facing home plate,” Morrissey bemoans. “What am I going to do? I have abnormally long femur bones to begin with and I’ll have to shift my entire body way off kilter just to see the video replays out in center. Ridiculous.”

Morrissey is holding out hope that he may be given an “obstructed view” discount on his seats now that he has to cock his head 30 degrees just to glimpse the visitor’s bullpen or centerfield scoreboard. But his level of optimism can be best described as hovering near a post-2003 ALCS level rather than some boyish Summer of ’67 “Impossible Dream.”

“All they ever show on television is the pitcher throwing to the catcher,” he reasons. “If I wanted to watch that for three-plus hours, I’d stay home. They shouldn’t be messing with local landmarks like this.”

While swiveling one’s neck in either direction as needed may sound like a perfectly reasonable compromise, 30-year season ticketholder Gretta Lebowicz advises against that technique.

“Back in the ‘80s, when I first got my right-field box seats, I was in and out of more chiropractors’ offices than Wade Boggs was in and out of hookers and KFC drive-thrus,” she estimates. “Your spine can only take so much. After a while, you realize you gotta pick one sightline and go with it.”

It’s been over 25 years since Nancy Cone saw a home run at the point of contact. Yet she, too, echoed the opinions of Lebowicz and Morrissey.

“They are just maiming history. Tom Yawkey and that guy Duffy, who they named the cliff after, would be rolling around in their graves if they could see it. Hopefully, the owners come to their senses and maintain the historic seating angles. Mayor Menino can’t let them get away with this.”

This entry was posted in Fenway Park, Red Sox, Sports. Bookmark the permalink.