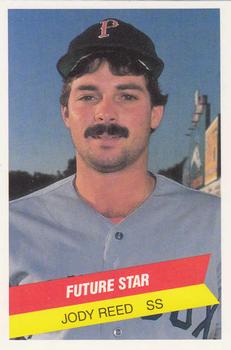 During the month of November, Fenway Pastoral will pay tribute to some of the most dignified and dapper mustaches to ever grace the faces of Boston Red Sox players throughout the team’s history.

The fourth entry in the series is fairly obvious, but nonetheless essential for this list: infielder Jody Reed. Reed played for Boston from 1987 to 1992, during which time he spanked 180 doubles and 17 home runs in 3,067 plate appearances. Reed was eventually drafted by the Colorado Rockies in the 1992 expansion team draft, but he was immediately traded to the Los Angeles Dodgers for Rudy Seanez (remember him?).

During his playing days, Reed was listed in media guides at 5’9″, 170 lbs. – much of which was packed into the dense thicket of brush he cultivated beneath his nose. Disappointingly, present day Jody Reed appears with a naked upper lip for his work on InsideBaseball.com. In this video, he explains the dangers of the “middle hop” grounder to a player’s fielding percentage. Unlike most of the Movember participants you may see roaming the streets at this juncture, Reed somehow manages to look creepier without a ‘stache than with.

This entry was posted in Red Sox and tagged Jody Reed. Bookmark the permalink.